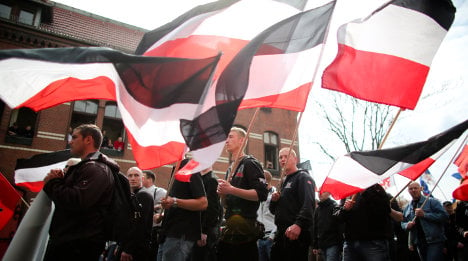 A rally of the far-right NPD party. Photo: DPA

The number of violent attacks on people because of their foreign identity rose 20.4 percent to 473 cases, according to the Federal Office for the Protection of the Constitution which produced the annual crime overview.

"It worries me greatly that the right-wing scene constantly tries to poison the atmosphere towards foreigners, by stoking fears and prejudices against asylum seekers," interior minister Thomas de Maizière said in Berlin as he presented the findings. "We will employ all means of this constitutional state to stop those who perpetrate violence."

The number of right-wing extremists considered to be ready to use violence remained constant at around 9,600 people.

Left-wing groups also showed a rapidly growing tendency towards violence, despite a slight drop in their estimated numbers to around 27,000 people. The number of those committing violent acts last year increased by more than a quarter to 1,110 instances.

Police and security officials took the brunt of the left-wing violence (43.2 percent of cases) and right-wing extremists (39.8 percent), the report said.

Meanwhile, de Maizière warned of the growing likelihood of attacks in Germany by hardline Islamists returing from the civil war in Syria.

By early 2014, more than 270 German Islamists or Islamists from Germany travelled to Syria to participate in the conflict or support the resistance to the regime of President Bashar al-Assad. Of these, around 100 are thought to have returned to Germany.

"An abstract danger has materialized into a definite and deadly danger in Europe, Germany included," said the minister.

"Germany is not far removed from [the effects of] terrorism. As before, we are a target of planned attacks," said Hans-Georg Maaßen, president of the Federal Office for the Protection of the Constitution.

The threat of fighters staging attacks in the European Union was highlighted last month with the fatal shooting of three visitors to the Jewish Museum in Brussels.

The man later arrested on suspicion of the killings had just reentered the EU via Frankfurt after spending a year in Syria and had been flagged up to French authorities as he travelled to France and Belgium prior to the attack.