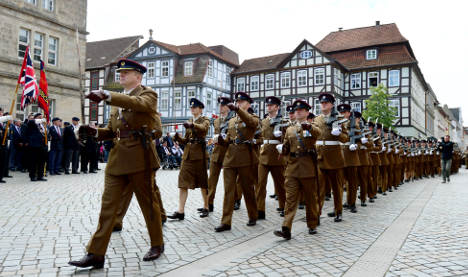 Soldiers from 28 Engineer Regiment stationed at Hamelin, the original home of the fabled "Pied Piper", officially closed the camp in Saturday's disbandment parade, ending UK forces' 69-year tenure in the western German base.

"This withdrawal is a development of historical proportions," said Hamelin's mayor Susanne Lippmann.

Hamelin, like numerous other small towns in western Germany, has been home to UK forces since the country was occupied by allied forces at the end of World War II. The bases were kept garrisoned in case of a land war with the Soviet Union during the Cold Wwar.

And after the USSR collapsed in the early 90s, Britain committed to removing its troops from Germany by 2035. But in his 2010 defence spending review Prime Minister David Cameron brought that deadline forward to 2020, prompting fears local communities would not have time to prepare for the possible adverse effects of the closures.

Despite the USA's plans to deploy more forces to central and eastern Europe in response to Russia's recent military aggression in Ukraine, British Forces in Germany (BFG) spokesman Mike Whitehurst told The Local on Monday there was "no indication" the UK would reverse the relocation of troops from Germany.

"The direction the British Army has received from the political masters is that all British troops should be withdrawn from Germany by 2020," he said. "So far we're on target for that."

In 1990 there were 3,500 UK soldiers stationed at the Hamelin base, but numbers have been gradually decreasing since then, and today only around 470 soldiers are based in the town of 56,000 people.

Mayor Lippmann warned the withdrawal would be a blow to the local economy, in one stroke making redundant hundreds of workers in the base's German civilian support staff and leaving around 340 apartments empty.

"It will take a long time for the market to absorb all that," said Thomas Wahmes, spokesman for the town's administration.

The gulf left by withdrawing British personnel could be even more of an issue for Bergen, a town of around 13,000 people around 100 km north-east of Hamelin.

When the 2,500 soldiers stationed at Bergen leave the base next year, the town's population will drop by almost a fifth.

The town's planning manager, Stephan Becker, said the withdrawal would cause the town problems, claiming it had an "excess of apartments which is hurting the town's development" to which the sudden vacation of hundreds of military homes would only add. But Whitehurst said the BFG administration was doing all it could to ease the transition.

"We are helping the German authorities by enabling access to our facilities, to see what they can do with our estate," he said.

"We've been hand in glove with the authorities in the hope that, post our departure they will get some other form of investment."

He added that in the case of Hamelin camp, these viewings had already begun and the British Ministry of Defense had already handed back "major chunks" of the base's real estate to the German government.

And addressing concerns for the welfare of the hundreds of German nationals currently working as civilian support staff on UK bases in Germany, Whitehurst said steps were being taken to ensure their "dedicated and loyal workforce" would not be left high and dry after the Army leaves.

"We are working with local employment agencies to see what we can do to help our people, even if that means having time off work to go on courses," he said.

"In some cases we will even pay for those courses,” he told The Local.

He said despite the accelerated withdrawal since 2010, reposting the soldiers would be a gradual process, with small elements of the units still stationed in Germany being transferred back to the UK.

Bergen base, along with the camps at Hohne and Bad Fallingbostel, is also set to close "in the next 18 months" according to Whitehurst, while troops at the main bases at Paderborn, Sennelage and Bielefeld (between Hannover and Dortmund) will gradually move to the UK over the coming years.

British camps at Detmold, Herford and Gütersloh are also intended to be fully closed by 2020.