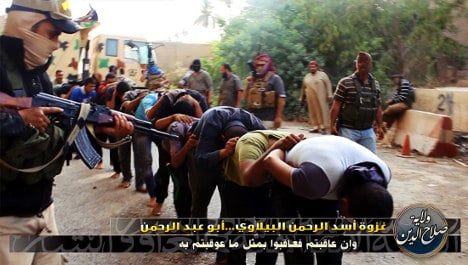 Steinmeier, speaking to the Welt am Sonntag newspaper, called on Turkey, the Gulf Arab states and Iran to do their part to stabilize Iraq.

"We have to prevent a proxy war of the regional powers breaking out on Iraqi soil," he said.
Steinmeier said these countries "could not have an interest in, beyond Syria, an enormous, ungoverned space developing in their backyards as a hotbed of mercenary groups, Islamists of every stripe, and terrorists".
He ruled out German military involvement in the conflict and criticized the Iraqi government for failing to integrate the country's rival regional, ethnic and religious groups.
"International aid has not been sufficiently put to use to create political and economic stability," he added, noting Germany had provided about €400 million in assistance to Iraq over the last decade.
A major offensive, spearheaded by powerful jihadist group the Islamic State of Iraq and the Levant but also involving late dictator Saddam Hussein's supporters, has overrun a large chunk of northern and north-central Iraq since Monday.
President Hassan Rouhani of predominantly Shiite Iran said his government was prepared to consider offering help to the United States should it take action to halt their advance.
Steinmeier served as chief of staff to former chancellor Gerhard Schröder, who fiercely opposed the 2003 US-led invasion of Iraq.