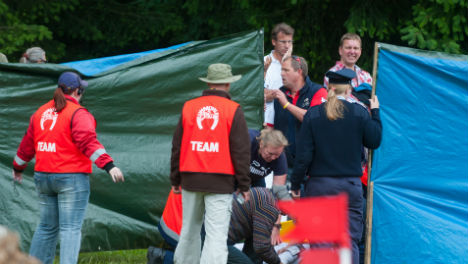 Medics tend to Benjamin Winter after his fall at the event in Luhmühlen. Photo: DPA

Winter, lying 14th after the dressage, fell heavily while clearing an obstacle during the cross country stage, and was pronounced dead on arrival at hospital.

Saturday was also marred by the death of a horse in the event for the second year running.

Last year, P'tite bombe, a 10-year-old ridden by French rider Emeric George, had to be destroyed after a fall during the cross country stage.