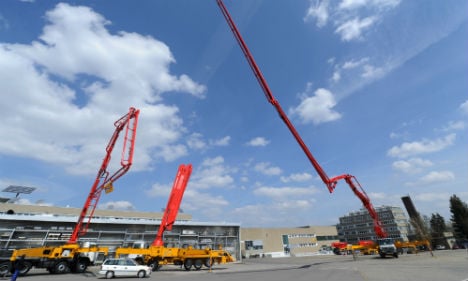 Two years ago, engineering firm Putzmeister passed into Chinese hands after the founding family was unable to find a successor.

The takeover by Chinese giant Sany for around half a billion euros was one of the biggest investments by China in Europe at the time. But it was just the tip of the iceberg.

"Every private equity fund in the world currently has its eyes fixed on this market," the expert said.

"German firms, and particularly family-run ones, are the ideal takeover targets for Chinese investors at the moment," said Stefan Heidbreder, head of the federation of family-owned businesses.

Around 75 percent of so-called SMEs — small and medium enterprises, or, to use the German term, "Mittelstand" — are in family hands. Specializing in high-tech industrial applications, the sector is known for its innovation and is the driving force behind German exports.

But the tradition of succession where the father hands over the business to his son or daughter is crumbling.

Detlef Keese, of the Institute for SME Research at Mannheim University, estimates that fewer and fewer companies are remaining in family hands: the proportion has fallen from 70-75 percent in the 1990s to around 50 percent at present.

The German association of chambers of commerce and industry, DIHK, sees it as a reflection of the ageing population. But it is also a social phenomenon,
it says.

"In a lot of cases, the children are reluctant to step in to their fathers' shoes, because they have seen what toll it has taken," said Arist von Schlippe, psychologist and lecturer in the management of family-run firms at the university of Witten.

In addition, a lot of companies are in a phase "where it's not just entrepreneurial drive and spirit that is required, but also management competence, which the young people simply don't have, or which their fathers believe that they don't have," von Schlippe said.

The first wave of post-war entrepreneurs passed on the torch in the 1970s and now it is the grandchildren's turn, the expert said.

And in the case of those companies set up in eastern Germany after the fall of communism, it is the time for the first generational changeover.

In the absence of a successor, it is sometimes the non-family management which takes over by way of a management buyout, with the financial backing, say, of a private equity fund.

But the investment funds themselves sometimes act on their own. And, in other cases, the company is simply snapped up by a rival.

From this point of view, Chinese investors can often appear to be the more attractive option. They are reliant on the current workforce and frequently hold on to the existing management teams, said Heidbreder.

Another attraction is that Chinese investors are more willing to pay higher prices, said Jens-Peter Otto, who heads the Chinese-German business group at
PWC.

According to data compiled by EY, the volume of Chinese direct investment in Germany rose from €46 million to €68 million between 2012 and 2013.