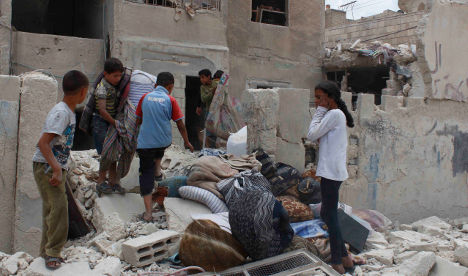 Survivors of the war in the city of Aleppo in north Syria. Photo: DPA

Interior ministers at both federal and regional level agreed to double Germany's intake of Syrian refugees, a statement by the regional interior ministry in western North Rhine-Westphalia said.

"Germany stands by its humanitarian responsibility. It is therefore right that we, together, help even more," Interior Minister Thomas de Maiziere said in the statement.
Europe's top economy had already agreed last year to take 10,000 Syrian refugees, of which around 6,000 are already in the country, the statement said.
But refugee rights group Pro Asyl has urged the government to increase its intake to include some 80,000 family members of Syrians living in Germany.
Before the latest announcement was officially released, the German branch of Amnesty International called it "only a small step", arguing most refugees still arrive via perilous routes.
The war in Syria has killed more than 162,000 people and forced nearly half the population to flee their homes.
SEE ALSO: German teen dies fighting in Syria