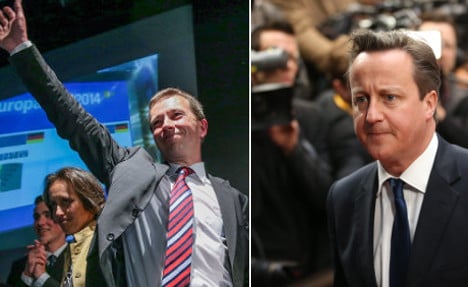 Cameron led his Conservative Party out of their European alliance with Merkel’s CDU/CSU parties in 2009 to form the European Conservatives and Reformists Group (ECR).

And he urged his MEPs to reject the bid by Germany’s new eurosceptic party, Alternative für Deutschland (AfD), to join the ECR group ahead of Thursday’s vote.

But Britain’s Conservatives lost six seats in the Parliament following May’s European elections, meaning they can be out voted in the group.

Some of them, however, appeared to have ignored his pleas and voted, along with their colleagues from other countries, to admit the AfD.

The AfD said it was voted in with a "clear majority", while Conservative MEP for Eastern England David Campbell Bannerman described the vote as "close" on Twitter. The vote passed by narrow majority of 26 against and 29 for.

Welcome to the @AfD_Bund party which has joined the ECR Group this morning.

“It is certainly bad for Cameron if he wants to show he is close to Merkel," he told The Local. "He now has one of Merkel’s fiercest enemies as an ally.”

The alliance with the AfD, who want to scrap the euro, will upset Merkel, whose support Cameron needs to renegotiate Britain’s relationship with the EU and see off his eurosceptic rivals UKIP.

He is also seeking the German chancellor's support to stop Jean-Claude Juncker becoming the next president of the European Commission.

A Conservative Party spokesman said: "We are very disappointed that AfD have been admitted into the ECR against our wishes. We note that the vote was a close one. We will work with the AfD in the European parliament but the CDU/CSU remains our only sister party in Germany."

The AfD, which only formed in February last year, took seven percent of the vote in Germany in May's EU elections and gained support from former voters of Merkel's conservative bloc.