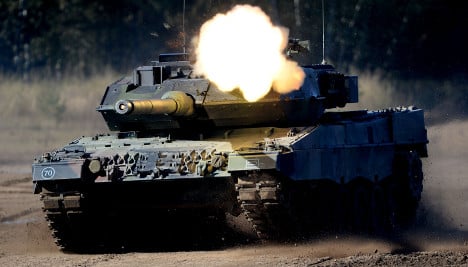 Gabriel, from the Social Democratic Party (SPD), whose department is responsible for approving German arms exports, will examine gun and tank exports more closely before approving them, the economy ministry said on Wednesday.

But that is likely to cost jobs in the already weakened German defence industry.

A report from Gabriel's department published on Wednesday showed the German government approved export licenses for arms worth almost €6 billion last year, including a record amount for deals with countries outside of the EU and Nato.

And its biggest customers have questionable human rights records.

Weapon manufacturers sent €562 million worth of arms to developing countries, including €12 million to the world’s poorest nations, the annual government report into weapons exports published on Wednesday morning showed.

Some of Germany’s biggest customers have serious question marks over their human rights records, including Algeria, Qatar, Saudi Arabia and Indonesia. It was the highest amount of weapons sold to developing countries since 2005.

The deals were approved by the last coalition government of Chancellor Angela Merkel's conservative bloc and the Liberals (FDP).

SEE ALSO: Why Germany should stop arming the world