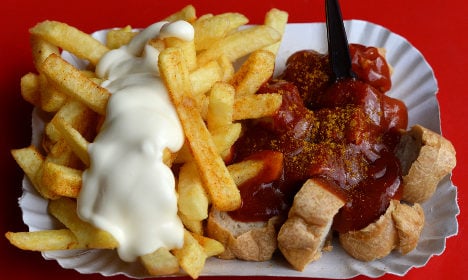 According to the Currywurst Museum in Berlin, some 850 million sausages are eaten in Germany every year, including 70 million in Berlin. Many of these are served as currywurst, a meal that traces its history back to the Allied occupation of Germany.

“There are several different legends about the invention of currywurst,” Bianca Wohlfromm of the Currywurst Museum told The Local. “For Berliners the inventor is Herta Heuwar in 1949. But Hamburgers also lay claim to the discovery.”

According to the Berlin version, Herta was inspired by seeing American GIs eating ketchup with their steak, but decided to substitute cheaper pork sausage, more affordable for impoverished post-war Germans.

For added kick, she mixed curry into the ketchup and patented it as “Chillup sauce.”

Ever since then, currywurst has been eaten all over Berlin at street stalls called Imbiss. It is especially popular as a late snack during a drunken night on the town. But it’s also a symbol of the egalitarian spirit of the capital.

“It still binds together people of different origins and social classes,” says Wohlfromm. “The mixture of sausage, sauce and spice has taken on a kind of cult status in Berlin and in all of Germany.”

Though they may not have any claim to inventing the original recipe, inhabitants of the populous Ruhr valley in North Rhine-Westphalia balk at Berlin-style currywurst.

“I was genuinely shocked when I saw this loveless ketchup with curry powder situation in Berlin,” says Witten native Inga Sophia Knoth. “The sauces in the Ruhr area are homemade by most stands. Their taste is excellent and I also prefer a warm sauce over ketchup.”

A working class area where miners and steel workers have always needed cheap food on the go, people here are proud of their currywurst, seeing it as a local symbol.

“There's nothing fancy about currywurst, it's a down to earth kind of food,” says Knoth. “It brings people together, everyone loves it – except for vegetarians maybe, but nowadays you can even get vegan currywurst, so it makes everyone happy.”

Herbert Grönemeyer, a renowned German singer hailing from the area, even popularized a folk song about it, “Currywurst”.

Battle of the Wurst

The Local chose two of most famous currywurst stands in Germany, Dönninghaus in Bochum and Konnopke’s Imbiss in Berlin’s Prenzlauer Berg neighbourhood. Both have been proudly serving up the dish for decades.

The currywurst at Konnopke’s was served in a rectangular cardboard bowl, swimming in ketchup. A not-so-generous helping of curry powder was shaken on as it was served through the window.

The sausage was light grey, tender and somewhat spongy. It had probably been boiled before being fried, typical of Berlin currywurst.

Though tastier than others we’d tried in the capital, Konnopke’s currywurst was really just ketchup soup with a sprinkling of curry powder. Nothing to write home about.

Dönninghaus, located in Bochum’s famous “Bermuda triangle” bar district, served their currywurst in much the same way as Konnopke’s. But the difference was all in the sauce.

It certainly wasn’t anything like Indian style curry sauce – more of a warm curry-infused barbecue steak sauce. But it still had a lot more spice than the Berlin variety, and turned out to be so addictive that we couldn’t help licking the cardboard clean.

Eddi’s Durst and Wurst, housed in a 70s style booth across from an abandoned factory, took a slightly different approach. The currywurst we ordered, along with fries and a heaping portion of mayonnaise, was served on a plastic plate.

The sauce was not unlike that we tried at Dönninghaus, but the sausage was of distinctly higher quality, deep red, and fried like an ordinary Frankfurter sausage.

Though we make no claim to scientific validity, The Local’s test seems conclusive – currywurst may have been invented in Berlin, but it was perfected on the banks of the Ruhr.

A sentiment echoed by Knoth: “For me it's enough that our currywurst is better, who cares who invented it?”

@TheLocalGermany Bochum is the best (and I've tried a lot)

@TheLocalGermany Curry 36 Berlin, but then I've only tried it in two places. Yet to make at home.