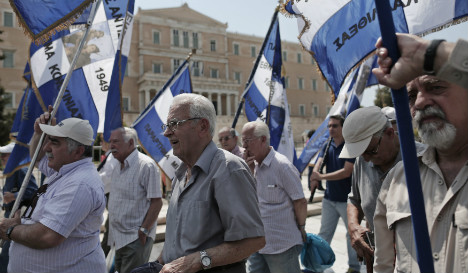 The protest by Greek and German activists was held on the 70th anniversary of the massacre of 218 civilians in the village of Distomo in central Greece by the Nazis on June 10th, 1944.

Holding banners that read "justice and compensation", they called for immediate action from Germany on a cause that has been taken up by pressure groups and opposition figures in Greece since the onset of the financial crisis.

Many Greeks blame Germany for the strict austerity imposed on their country in return for a massive €240 billion bailout funded jointly by the European Union and the IMF.

Greece agreed to significantly cut public spending in order to receive the bailout and stay in the eurozone, but the austerity measures imposed by the government, at the insistence of the EU, are deeply unpopular.

One of the most prominent campaigners on the issue, former Greek resistance fighter and newly elected MEP, Manolis Glezos, told Skai radio station that the issue of reparations would be the first thing he raises at the European Parliament.

Glezos, who at 91 is the oldest person to be elected to the EU Parliament in 2014, is a member of the left-wing SYRIZA party.

The Greek president, Karolos Papoulias, who was also a member of the resistance to the Nazis from 1942 to 1944, supports the campaign for reparations and claims to have raised the issue with his German counterpart during a visit to Greece in March.

A working group set up by the Greek government estimates that the total amount due to Greece is €162 billion.

Berlin argues that the issue of reparations to Greece has already been settled, and points to the 115 million Deutsche Marks it paid in 1960 as part of an agreement with several European governments.