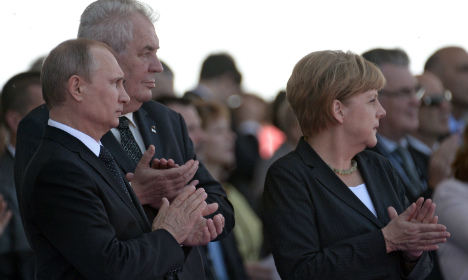 "We support accession. But we don't think that we have anything to gain if the criteria are not respected. And there are some very clear criteria for the steps to get closer to the EU," said Merkel, who is due to meet Serbian Prime Minister Aleksandar Vucic in Berlin on Wednesday.

But if the criteria and treaties are respected, "then there is clear prospect for western Balkan states" to join the EU, she said.

Aspiring EU entrants must meet key democratic benchmarks before being considered candidates to join, a process which then takes many years as the nations bring their legislation in line with the bloc.

Stressing Germany's "strong commitment" in the Balkans, Merkel said her government has invited all the states in the region to join a conference in Berlin in late August.

She also lauded Serbia's progress in normalizing ties with Kosovo, admitting that she had doubts two or three years ago over whether progress was achievable.

Pristina unilaterally declared independence from Serbia in 2008 and won recognition from about 100 countries, sparking fury in Belgrade.

But the two bitter foes reached a historic deal in 2013 to normalize their relations, setting them firmly on the path towards winning EU membership.

Other Balkan EU hopefuls besides Serbia and Kosovo are Montenegro, Macedonia, Albania and Bosnia.