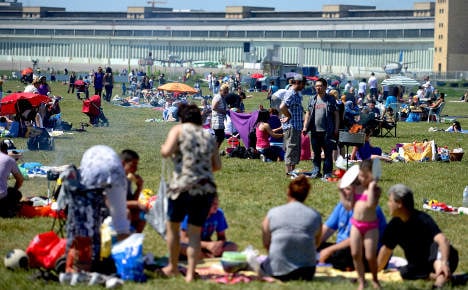 People barbecuing in the sun at Tempelhof. Photo: DPA

According to Tempelhof's park manager Michael Krebs, there could be a number of pieces of ammunition buried under the grass at Berlin's former airport-turned park.

The grounds have been repeatedly searched for ammunition and explosives, most recently in 2009, Petra Rohland of the Senate Department for Urban Development told the Tagesspiegel newspaper.

But the danger lies when digging into the ground, for example by hitting in large tent pegs used to secure volleyball nets or beach tents used for shade.

Digging into the park's surface has been forbidden for four years. “These rules have been in effect since the day the Tempelhofer Feld was opened,” Krebs told The Local on Friday, adding there was no danger of bombs going off.

The park management has spoken out about the ban after headlines from Berlin newspaper BZ this week warned people of unexploded bombs in the park.

The park is monitored around the clock by park supervisors, who ensure that visitors do not dig into the ground with spades or tent pegs, Krebs said. Visitors failing to obey the rules will be confronted by the park's security.

Volleyball player Hakan, 46, has been playing the sport with his family at Tempelhof for three years, but he told the BZ newspaper that park supervisors spotted tent pegs fastening his volleyball net to the ground and approached him.

The pegs were 30 cm long and were hit into the ground at a slant, less than 20 cm deep. Hakan said that no-one had ever complained about this in the last three years.

An extensive scan of Tempelhof with a metal detector would be impractical, Krebs said. “Tempelhofer Feld is 303 hectares big. This is an area about the size of New York's Central Park,” he said.