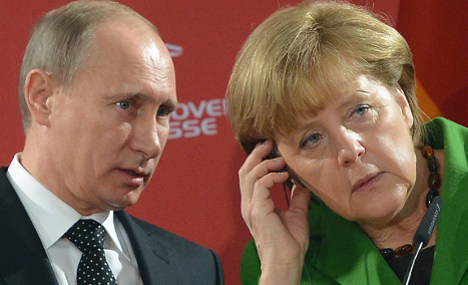 Hours before the Group of Seven rich countries begins talks in Brussels without Russia, Merkel called in a speech to parliament for stiffer border controls by Russia to stop fighters or weapons crossing into Ukraine.

She told MPs that if the destabilization in eastern Ukraine, where separatist rebels have been fighting Ukrainian security forces, "doesn't stop, then we will not be afraid of imposing further sanctions".
Merkel specifically mentioned so-called "level three" sanctions that would hit economic sectors rather than just individuals.
She stressed, however, that the punitive measures were not "ends in themselves".
"We don't want them, we want a close partnership with Russia. But if they were to be unavoidable then we will decide them unanimously."
Russia was originally due to host the annual G8 summit in the resort of Sochi, but the G7 leaders agreed in March to exclude Putin and hold the smaller G7 format in Brussels following Russia's absorption of Crimea.
SEE ALSO: German hostages freed in Ukraine