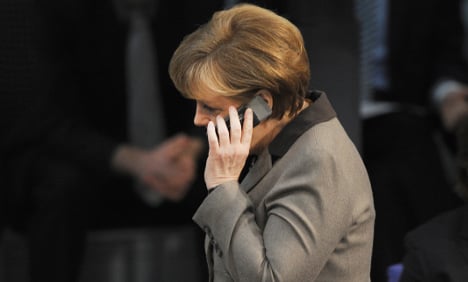 Photo: DPA
Federal Prosecutor Harald Range announced an investigation over alleged snooping on Angela Merkel's mobile phone by the NSA, in a case that has soured relations between Germany and the US, on Wednesday morning.
Range told broadcaster ARD on Wednesday evening that questioning the Chancellor was "not on the agenda". He added that there were also no plans at the moment to question former NSA contractor turned whistleblower Edward Snowden who leaked evidence about a mass surveillance programme by the NSA.

The long-anticipated probe, which follows an explosive allegation last year that US spies had eavesdropped on Merkel's mobile phone conversations in the past, is against persons unknown,  Range said.

"I informed parliament's legal affairs committee that I have started a preliminary investigation over tapping of a mobile phone of the chancellor," he said.
However, in a move that was condemned by opposition and Social Democrat lawmakers, he added that he had decided against opening an investigation into claims of wider NSA surveillance against German citizens.
The latest move may again strain ties between Washington and its key European ally, Germany, which both countries' leaders have been at pains to restore following the reports.
The claims embarrassed US President Barack Obama and led Merkel to comment that spying between friends is "just not done".
Her spokesman declined to comment directly on Wednesday saying the federal prosecutor had taken the decision "according to the letter of the law".
The government had no right to influence, nor did it exert influence, in the discussion over whether to launch the probe, Steffen Seibert told reporters.
'Best done diplomatically'
US State Department deputy spokeswoman Marie Harf said German concerns over the alleged US tapping of Merkel's cellphone were best dealt with through diplomatic channels.
The issue had been raised directly with the German government. "So I think that's probably the most appropriate venue."
Harf said she did not have any information on whether the United States would cooperate with the German federal prosecutors' investigation.
'Remarkable step'
Data-sensitive Germans reacted with outrage to the accusations by fugitive intelligence contractor Snowden, in a country where bitterness lingers about mass state spying on citizens by the Stasi secret police in former communist East Germany where Merkel grew up.
"There are concrete facts which justify the suspicion of possible spying on a mobile phone of Chancellor Angela Merkel by unknown personnel of US intelligence services," a federal prosecutor's statement said.
But the decision to limit the probe to the allegation concerning Merkel's phone prompted criticism.
"The main offence that is being discussed here, is the mass spying," Greens party lawmaker Hans-Christian Ströbele said.
Ralf Stegner, of the SPD, Merkel's coalition partners, was also critical, citing in the online edition of Handelsblatt business daily from George Orwell's book "Animal Farm" that "all animals are equal but some are more equal than others".
News weekly Spiegel said the decision was a "signal" to the Obama administration that Germany can defend itself legally.
"With all the to- and fro-ing of the last weeks, it is a remarkable step which again puts the relationship between Berlin and Washington to the test," it said in its online edition.
After the investigation by the federal prosecutor is finished, Range must still decide whether to bring charges, for example against the head of the NSA at the time of any alleged incident.
But German criminal procedure foresees proceedings being stopped in the event it could lead to a serious disadvantage for Germany.
Berlin set up a parliamentary panel in April to assess the extent of spying by the NSA and its partners on German citizens and politicians, and whether German intelligence aided its activities.
It has decided it wants to question Snowden – regarded as a traitor by the US administration and subject to an arrest warrant – perhaps via video link or by sending an envoy to Russia where he has been given temporary asylum.
Obama sought to quell the international furore over the reports of NSA activities, announcing in January he had halted spy taps on friendly world leaders and curtailed the reach of mass NSA phone surveillance.
In an interview with a German TV channel a day later he assured Merkel that he would not let intrusive surveillance harm their relationship but that intelligence gathering on foreign governments would continue.
During Merkel's visit last month to Washington, she and Obama admitted that differences remained.