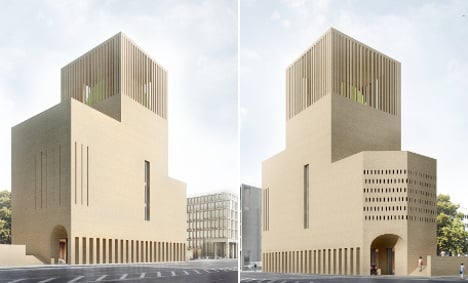 Architect designs of how the building will look. Photo: KuehnMalvezzi/house-of-one-org

Called the House of One, the building would become the first in the world built together by the three religious to pray in. It will house a church, synagogue and a mosque.

The fundraising campaign was launched in Berlin on Tuesday with the symbolic handover of the first brick. Financed by sponsors, anyone can donate money online, with one brick costing €10.

The idea for the House of One came about in 2009 following archaeological excavations on the south side of the Museum Island.

Remnants of the city's medieval centre were found and the religious leaders decided to build on the foundations to symbolize the religions longest associated with Berlin.

“We quickly agreed that something visionary and forward-looking should be built on a historic place such as Petriplatz, the founding site of Berlin,” said vicar Gregor Hohberg who initiated the project. “The basic idea behind House of One is to bring people together who know little about each other. Ignorance is often the basis of rejection,” Rabbi Tovia Ben-Chorin added.

Imam Kadir Sanci, who together with the other two men is on the board of the project, said: “The aim of our construction is to consciously promote non-violent and open dialogue between different religions and cultures. Everyone is welcome and invited to discover previously unknown aspects of other religions.”

Construction will start when the first €10 million has been raised.