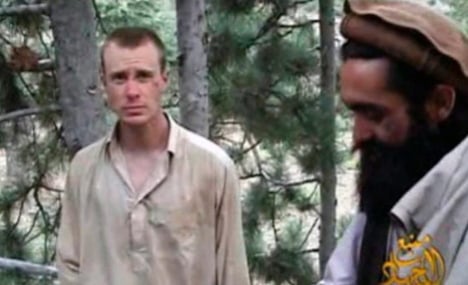 A handout image released by IntelCenter showing captured US Army soldier Bowe Bergdahl (l) with a Taliban commander (r) in a video released by the Taliban in 2010. Photo: EPA/INTELCENTER/DPA

Bergdahl, who arrived on Sunday at the US military medical centre in Landstuhl a day after his release, "continues to progress", the centre in southern Germany said.

He is "in stable condition", it added in a statement.
"The goal is to return him to family and society and on the path to complete recovery," it said, adding there was no "predetermined timeline" for his recovery process at the centre.
"The duration will continue to be based on the pace of his healing and reintegration process."
After his care in Germany, Bergdahl is set to go to the United States for continued medical care at San Antonio Military Medical Center in Texas, it said.
Details about his medical condition cannot be released, it added.
US President Barack Obama is facing questions about the deal to secure Bergdahl's release in return for the transfer of five Taliban prisoners from prison in Guantanamo Bay.
The only US soldier held by the Taliban after being captured in Afghanistan, Bergdahl was freed on Saturday in a deal brokered by Qatar.
SEE ALSO: Ex-US army officer can't drive his €88k Ferrari