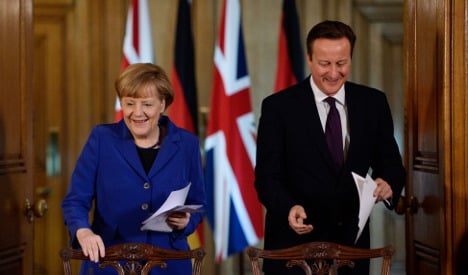 Merkel with Cameron in February this year at a press conference in London. Photo: DPA

Merkel told parliament that while she was aware of London's objections to her favoured candidate to become the EU Commission's next president, former Luxembourg premier Jean-Claude Juncker, she hoped the dispute would not come to a head.

"I don't share these reservations but I must say just as clearly that I consider it grossly irresponsible, and actually unacceptable, how nonchalantly some say that it doesn't matter whether Britain agrees or not, or even whether Britain remains an EU member or not," she said.
Merkel said she was "anything but indifferent" about London's future in the bloc, saying that while Britain had clearly gained from its membership, the EU has benefited as well.
"Yes, Britain is not a compliant partner," she said. "[But] despite all the differences, Germany and Britain share values and interests. We pursue shared goals, above all the goal of a strong, competitive European Union."
Germany's leading news magazine Der Spiegel said in a strongly worded editorial this week that Britain had "blackmailed and made a fool out of the EU for years" and should now decide once and for all whether it wanted to remain a member.
The piece echoed widespread frustration in Berlin over a perception that Britain has grown increasingly critical of the EU, seeking to "cherry pick" the benefits of membership while resisting its responsibilities.
The editorial accompanied a report in the magazine that Cameron had told Merkel that picking Juncker would "destabilize his government" and force him to bring forward a referendum on whether to exit the EU.
Despite her conciliatory tone, Merkel reiterated in Wednesday's speech that she was pressing for Juncker to take the reins at the Commission in her negotiations with European partners.
And she stressed that there did not need to be unanimity on the decision, only a qualified majority of EU member states.
Cameron is deeply wary of Juncker, an EU federalist, particularly after his
party suffered a humiliating defeat to the eurosceptic UKIP party in last month's European elections.
Besides Cameron, leaders in Sweden, Hungary and, according to several European sources, the Netherlands and Finland are also hostile to Juncker.
SEE ALSO: German eurosceptics give UK PM Cameron a headache