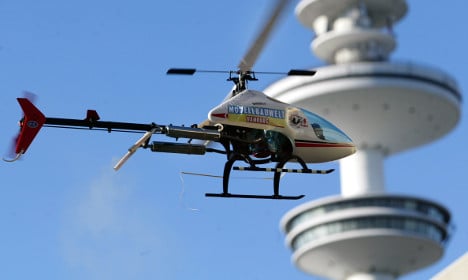 The man lost control of a four-kilo model aircraft and its blades fatally wounded his head. Photo: DPA

The 73-year-old from Menz in Brandenburg, who was a US citizen, lost control of the model aircraft as it was taking off and he was fatally injured when the model's 1.55 metre-long spinning blades hit him.

The man's German wife and three other pilots flying the models on a field in Neuholland, Brandenburg, witnessed the incident. They gave him first aid and called emergency services, local newspaper the Märkische Zeitung reported.

An ambulance, an emergency doctor and a rescue helicopter were all called to the scene.

Police said in a statement on Monday they found no evidence of anyone having tampered with the model aircraft and they are now investigating the death.

Tom Wellmann, press spokesman for the German model pilots' association (DMFV), said the dead man had been an experienced pilot and had flown his "Logo 600 SE" helicopter there several times before without any problems.

Wellmann said the chances of the accident having been caused by a technical fault were "very low" as the model type was especially reliable.

"To my knowledge this is the only fatal accident ever caused by model aircraft in Germany," he said.

He added he believed the fatal helicopter collision could only be the result of a "series of unfortunate circumstances".