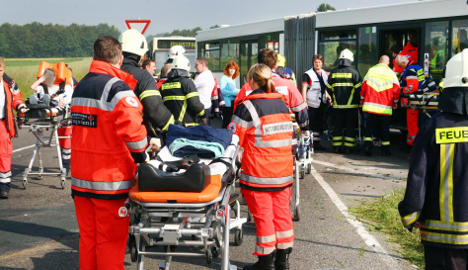 The children were injured on Tuesday morning in the crash. Photo: DPA

The accident happened shortly before 8am in Jülich, a town in North Rhine-Westphalia, when a pensioner from Finsterwalde in Brandenburg crashed his Subaru into a bus carrying 142 children to primary school.

Many of the youngsters were thrown out of their seats.

It is believed the 82-year-old man tried to turn onto a road between Jülich and Jülich–Koslar and collided head-on with the bus, a police spokeswoman said on Tuesday. The accident caused around €25,000 in damage.

Several of the children were treated on stretchers by paramedics but police reported that none of the 15 injured children were seriously harmed.

The female bus driver, 35, from Düren was also injured and taken with the children to nearby hospitals. The 82-year-old driver's injuries were more serious.