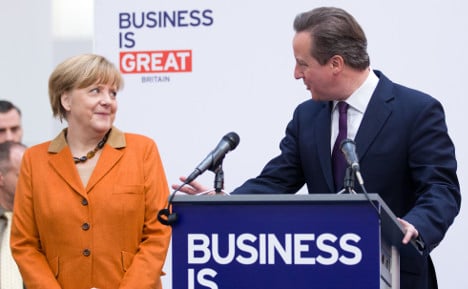 Merkel and Cameron pictured at the CeBIT Messe in Hanover in March. Photo: DPA

Merkel reiterated that she was pressing "in all the talks that I have" for former Luxembourg premier Jean-Claude Juncker to gain majority backing to become the EU Commission's next president.

But she said she hoped such a "controversial" decision would be taken in the "spirit of Europe" which meant seeking the "highest degree of consensus".
"Therefore it's not as though I don't mind, for example, whether Britain is a member of the European Union or not," Merkel told a joint press conference with the visiting Georgian prime minister.
Her spokesman had also earlier said that Britain belonged in the EU and that neither Merkel nor her government was "indifferent" as to whether non-euro member Britain was part of the wider 28-nation bloc.
"On the contrary, we're convinced Britain belongs in the EU," Steffen Seibert told reporters, adding Britain had gained much from its European membership, but also had a lot to contribute.
He said every member state had its "interests" and "own wishes" that it represented, which Germany had also done.
But he added that Europe "brings together individual, diverse states" and only succeeds in the long term with "respect, consideration, with ongoing discussion".
The comments follow a weekend German media report that British Prime Minister David Cameron had warned that his country could leave the EU if Juncker got the top commission job.
News weekly Der Spiegel said that Cameron told Merkel that picking Juncker for the job would "destabilize his government to such a point that it would bring forward a referendum on whether to exit the EU".
He has already pledged to hold a referendum on Britain's EU membership in 2017.
Cameron is deeply wary of Juncker, an EU federalist, particularly after his party suffered a humiliating defeat to the eurosceptic UKIP party in last month's European elections.
Besides Cameron, leaders in Sweden, Hungary and, according to several European sources, the Netherlands and Finland are also hostile to Juncker.
SEE ALSO: UK Conservative MEPs back AfD alliance