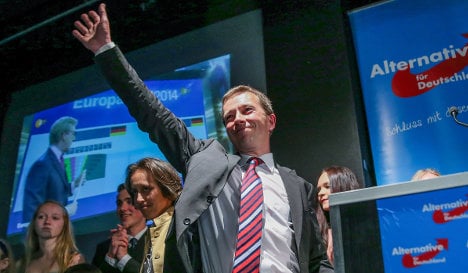 The party has been keen to join the British Conservatives in Brussels, seeing them as natural allies for EU reform.

But British Prime Minister David Cameron said before the European elections that Merkel’s party remained the Conservatives’ “sister party” in Europe, despite them no longer sitting in the same bloc in the EU Parliament.

An alliance with the AfD, who want to scrap the euro, would upset Merkel, whose support Cameron needs to renegotiate Britain’s relationship with the EU and see off his eurosceptic rivals UKIP. The AfD took seven percent of the vote in Germany and gained support from former voters of Merkel's conservative bloc.

But on Saturday British Conservative MEPs came out in favour of an alliance with the AfD.

So, Merkel has endorsed Juncker after all, what a surprise! Seems to me there's now no reason not to admit the #AfD to ECR next week.

Even if Cameron puts pressure on his MEPs to reject an alliance with the AfD they could still join the ECR. The British Conservatives have 19 MEPs out of the 46 in the group.

AfD leader Bernd Lucke told the Financial Times on Friday that he had the support of the Polish and Czech members of the group and claimed Cameron was being “used” by Merkel.

He said: “It seems that Angela Merkel tried to mobilize David Cameron to solve her domestic political problems and isolate the AfD.

“I can’t imagine a British prime minister would allow himself to be manipulated in this way.

“We have agreement on David Cameron’s agenda for Europe. We support his views on a more decentralized EU.

“We are exactly the right guys to support his views in Germany. The CDU doesn’t support his ideas. We have the same policies as David Cameron. I think he is being used.”