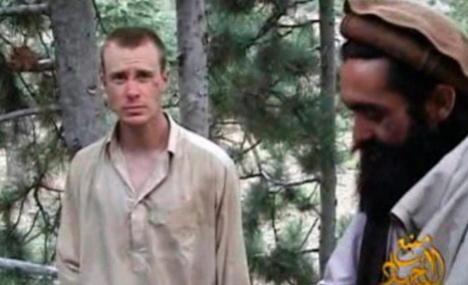 A handout image released by IntelCenter showing captured US Army soldier Bowe Bergdahl (l) with a Taliban commander (r) in a video released by the Taliban in 2010. Photo: EPA/INTELCENTER/DPA

Bergdahl will now remain at the Landstuhl centre in southern Germany while he continues what the US army called his "reintegration process", the base said in a statement on Sunday.

The base said there was "no pre-determined amount of time involved" for Bergdahl's recovery process, adding the medical staff at Landstuhl were "sensitive" to what he had gone through and would "proceed with his reintegration at a pace with which he is comfortable."
"The full focus of the Landstuhl team is to provide necessary medical care and a safe environment for his recovery," the statement added.
Bergdahl, the only US soldier captured by the Taliban since the war began in 2001, was freed in exchange for five senior insurgent detainees as both parties claimed success for the dramatic deal, which was brokered by Qatar.