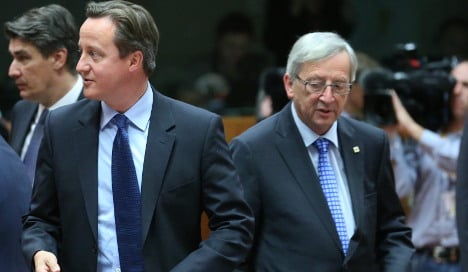 Quoting "sources close to the participants" of Tuesday's EU leaders summit in Brussels, the German magazine reported that Cameron had issued the warning to Merkel, who backs Juncker, Luxembourg's former premier, for the top commission job.

Cameron reportedly told Merkel that picking Juncker would "destabilize his government to such a point that it would bring forward a referendum on whether to exit the EU" – a move which is likely to result in a popular consensus to leave the bloc.
"A figure from the 80s cannot resolve the problems of the next five years," Cameron reportedly said, according to extracts of the Spiegel article.
Cameron is deeply wary of Juncker, a EU federalist, particularly after his party suffered a humiliating loss to eurosceptic UKIP in the European elections.
He has already pledged to hold a referendum on Britain's EU membership in 2017.
Contacted by AFP, a Downing Street spokesman declined comment on the Spiegel article, saying it is too early to be making any comments on potential candidates for the European Commission job.
Merkel had said on Friday that talks were being held in the "spirit that Jean-Claude Juncker should become president of the European Commission" in her clearest statement of support for the veteran politician.
But besides Cameron, Sweden's Fredrik Reinfeldt, Hungary's Viktor Orbanand, according to several European sources, the Netherlands' Mark Rutte and Finland's Jyrki Katainen, are also hostile to Juncker.
EU leaders have traditionally named the Commission head on their own, but under new rules they now have to "take into account" the results of last Sunday's European parliamentary elections, though exactly what that means remains unclear.