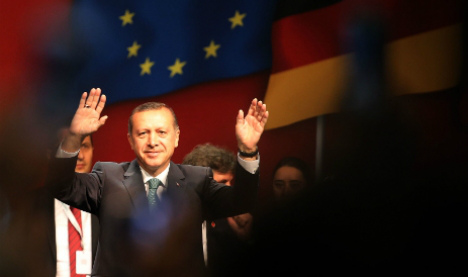 Amid heightened tensions between Ankara and Berlin, Erdogan complained to deputies from his AKP party on Tuesday that a leader of the German Green Party of Turkish origin, Cem Ozdemir, had said "very ugly things" about him.

Erdogan called Ozdemir a "so-called Turk" and indicated he was no longer welcome in Turkey after critical comments he made about a rally the premier held in the western German city of Cologne last week, according to a transcript.

"Particularly due to your origins, you have no right to talk this way about the prime minister of a country you belong to," Erdogan said, referring to Ozdemir.

Ozdemir had warned Erdogan ahead of the event in Cologne that he should not bring internal disputes to Germany, in a reference to bloody strife in Turkey.

Erdogan and his Islamic-rooted AKP have polarized Turks at home and abroad over what critics call his authoritarian style, a crackdown on civil liberties and corruption scandals under his rule.

The source said Turkey's envoy, Huseyin Avni Karslioglu, had been "invited" to the foreign ministry late Wednesday "to express our dismay about comments by the Turkish government".

"This type of public criticism of an important German politician, who has always worked in the interest of good relations between Germany and Turkey – also in the run-up to Prime Minister Erdogan's visit – is unhelpful for the German-Turkish relationship," the source said.

The official, who spoke on condition of anonymity, stopped short of saying Karslioglu had been "summoned" to see the ministry's political director, Hans-Dieter Lucas, which would be a more serious measure in the language of diplomacy.

Erdogan roused cheering supporters with the May 24th speech in what was widely seen as a campaign rally in Germany, which has the world's biggest Turkish expatriate community.

He is expected to run for Turkey's presidency in August, and Germany has a Turkish community of three million, half of them eligible voters.