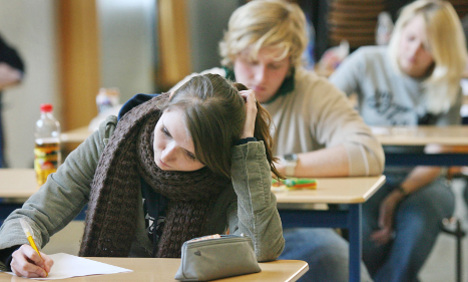 Germans may be seen as comparatively well-off by the rest of the continent, but the nation's youth are having an increasingly hard time, a new report suggests.

Every fifth teenager in Germany lives in poverty or is on the borderline, according to the Catholic church-funded youth poverty monitor 2014, released on Friday in the southern city of Regensburg.

The annual study, which brings together available statistics and research on young people aged 15 to 24, found that education played a key role in which youngsters would end up in poverty.

Typically those worse affected by youth poverty, the study found, were teenagers with leaving certificates from Hauptschule schools, the lowest rung on the academically-tiered German school system, or those who drop out early.

Education is the best protection against poverty, the report's authors concluded, however access to education in the country is far from equal.

In the capital Berlin, over 20 percent of young people are thought to be claiming Harz IV unemployment benefits.

In Bavaria, Baden-Württemberg and Rhineland-Palatinate however, there is less youth unemployment, all three states below the nationwide average of 8.9 percent.

This poverty occurs due to the absence of equal opportunities in the German education system, which often results in young people being excluded from society, explained Simon Rapp, Chairman of the Federal Association for Catholic Youth Welfare (BAG KJS), the organization which commissioned the study.

“Poverty is inherited and often passed on to generations from the parents to the children." Rapp said. "The risk of becoming poor and staying poor increases with a migrant background, disability and lack of education. Allowing this to happen is shameful for Germany.”

“Education and vocational training is too dependent on someone's social origin," he added.

"In order to prevent poverty from becoming purely an inherited problem, we need a right to education that is enshrined in law."

SEE ALSO: Every third child in Berlin lives off benefits