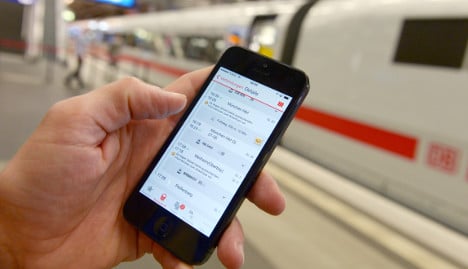 Good internet connections will be rolled out across all high-speed ICE trains, regardless of the route being traveled, the rail company said on Tuesday.

Currently a limited number of ICE trains, serving about 3,000 km of track, allow passengers to log onto a pay-as-you-go wireless hotspot.

Deutsche Bahn CEO Rüdiger Grube said the rail operator will extend the service  to include trains running on the entire nationwide ICE network of around 5,200 km.

“Internet access as well as comprehensive travel information are becoming increasingly important for customers when choosing a mode of transport," wrote Deutsche Bahn in a statement, "which is why Deutsche Bahn and the Federal Government wanted to extend the DB's digital range on offer."

DB are rolling out the internet service with Deutsche Telekom using WiFi hotspots, which cost €4.95 for a day's access.

Of the 255 ICE trains in Germany, 200 currently have the necessary technology for an internet connection.

“Digitization must be a priority in the rail sector,” Minister of Transport and Digital Infrastructure Alexander Dobrindt said in Berlin Central Station on Tuesday. “The broadband technology will be standard in the manufacture of new trains, existing trains will be upgraded gradually .” DB said it has also equipped 120 stations with Wi-Fi and this would be extended to another 24 stations in the next few months.