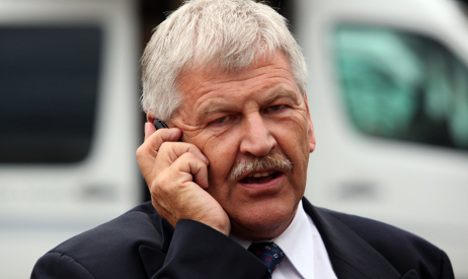 Udo Voigt. Photo: DPA
The son of a Nazi SA assault division member, Voigt, 62, was the chief candidate for the extremist National Democratic Party of Germany (NPD), which scored one percent in the German vote for the EU-wide election on Sunday.
Three years after being found guilty in 2004 of promoting Nazism after he called Hitler "a great man", Voigt questioned the number of Holocaust deaths and demanded the return of German land lost after World War II.
He also received a four-month suspended jail sentence for inciting violence after calling in a 1998 campaign speech for voters to engage in "armed combat".
And in 2011 the NPD stirred controversy again, with posters depicting Voigt, on his motorbike, wearing a black leather jacket, with the motto "Gas geben" (Step on It) or literally "give gas" in what some saw as a reference to gas chambers where millions of Jews perished in Nazi extermination camps.
The signs were put up around Berlin, including just across from the capital's Jewish Museum.
Voigt, who is married and trained as an aviation engineer before graduating in political science, was head of the NPD from 1996 until 2011.
Despite its meagre score in Sunday's elections, the NPD has benefited from the recent scrapping of a three-percent threshold for European elections in Germany, enabling it to now send a lawmaker to the European Parliament.
As an MEP, Voigt will be paid €8,020 a month, earn a 3.5 percent pension, have a monthly expenditure allowance for office costs of €4,300, a travel allowance of €4,243 a year and a daily food and accommodation allowance of €304.
Chancellor Angela Merkel's spokesman Steffen Seibert has labelled the NPD "an anti-democratic, xenophobic, anti-Semitic, anti-constitutional party".
"The whole of Europe is being flooded with foreign peoples," states the NPD website and it campaigned for Sunday's elections with posters claiming "Money for Grandma, Instead of for Sinti and Roma".
Germany's upper house of parliament last year launched a push before the Constitutional Court to ban the NPD, a decade after a first attempt failed.
At the time Germany's highest court argued that the presence of undercover state informants in party ranks had sullied the evidence.
The NPD scored just 1.3 percent in national elections last September and has never entered the national parliament but is represented in two eastern states' legislatures.
The party was created in 1964, notably by former Nazi party members.
As head of the party, Voigt managed to triple the membership of the NPD and has sought to clean up its public image by urging skinheads to keep a lower profile.
SEE ALSO: Former neo-Nazi head opens bar in Spain