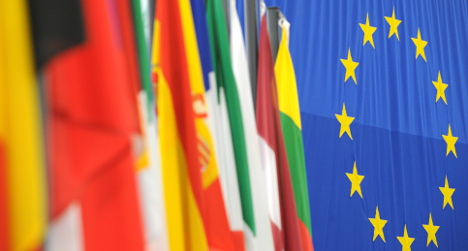 It's lonely at the top, at least for the German pro-Europeans of Chancellor Angela Merkel's ruling CDU/CSU/SPD coalition. After a strong endorsement from the German public at the weekend they will return to the European Parliament far stronger than centrist parties in other EU countries.

But across the continent, landslide results for the EU's sworn enemies will see German advocates of European integration forced to face up to their fiercest opposition yet – right at the heart of political Europe. The German press has been wringing its hands.

"A dangerous divide is opening up in Europe,” wrote the Tagesspiegel. "Pro-European Germany is getting more and more powerful – and is distancing itself further and further from the rest of the Union."

While humiliating results for French President François Holland and British Prime Minister David Cameron have left old European powers out in the cold, "Germany's influence on EU politics grows bigger and bigger – which in turn reinforces the resistance in Europe to a union which is already seen as too German,” the paper said.

Only one thing is clear as the EU's fate hangs in the balance, the paper wrote, "that the European Union does not have a future as a German Union." ‘No longer a playground’

"Europe has changed since Sunday," wrote the left-leaning Süddeutsche Zeitung. "Many of its dedicated opponents have now entered the [European] parliament, which until now has been a playground for the friends of Europe."

The result can only mean one thing. "The consensus base for close continental cooperation, which has ruled for decades, is crumbling."

And it could wreak havoc in the EU, warned Bild tabloid. Up to 130 of the total 751 seats in the new European Parliament will be occupied by EU opponents.

“Together they could heckle the democratic parties – or cripple parliament with their initiatives. The horror scenario: the right-wing parties from France, England, Austria and Holland form a fraction,” Bild said.

And on Tuesday, Germany's finance minister Wolfgang Schäuble described France's National Front as "fascist". "My conviction is we have to make Europe better, not become eurosceptic," he said.

It's "no longer so easy to paint the AfD as the right or even far-right villain of the piece," said the conservative-leaning Frankfurter Allgemeine Zeitung (FAZ).

If they do as they have promised and have "nothing to do with EU-haters such as Marine Le Pen in Brussels," then the party could begin to mount a challenge to Merkel's ever-popular CDU at home. "The more respectable the AfD becomes, the more CDU supporters may be tempted to vote for the conservative offshoot,” the paper noted.

Above all, the attempt to tarnish the eurosceptics "as right-wing populists or even as cunningly-disguised far-right extremists" is "nonsense," wrote the Süddeutsche Zeitung in a separate commentary.

"Of course the AfD has a few strange and some nightmarish reactionaries in its ranks. But at its core it is a party of the middle classes. The CDU and CSU know that, many of the AfD's influential powers have come from their ranks."