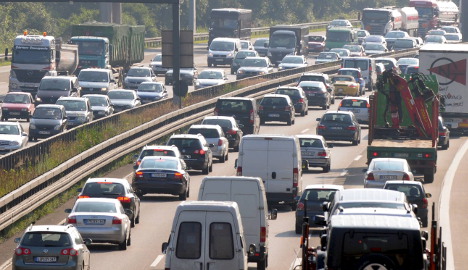 The crash happened on the A3 near the Frankfurter Kreuz interchange. Photo: DPA

The 29-year-old Frenchmen, who police described as drunk, was driving on the A3 towards Würzburg and was near the Frankfurter Kreuz interchange when he pulled up on the hard shoulder to relieve himself at 3am.

After he stopped and got out, the Opel Vectra behind him, carrying a family-of-five, drove into the back of his Opel Zafira causing €18,000 worth of damage, Frankfurt Police said in a statement on Sunday.

The Zafira, carrying three passengers, was catapulted across three lanes and smashed into a concrete wall. One passenger was severely injured and taken to hospital with head injuries. The other two passengers escaped unharmed.

The family-of-five, including a four-year-old child and a 15-year-old boy, all suffered minor injuries and were also taken to hospital.

Police tested the unharmed drunk driver for alcohol and found he had a blood alcohol level of 1.36 percent. The limit is 0.5 percent if you are involved in a crash. His driving licence was confiscated.

The motorway was closed while the debris was cleared.