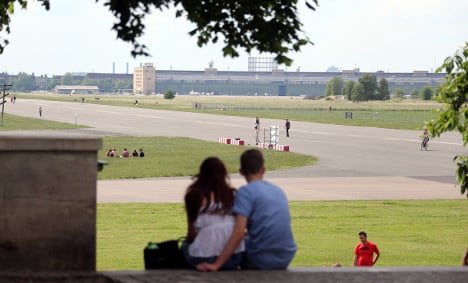 Plans to build on the defunct airport, reopened as a park in 2010, have been shelved for good. Photo: DPA

A day after around 65 percent of voters decided to keep 100 percent of Tempelhofer Feld as a public park, the former airfield field looked just like in the campaign leaflets – a vast expanse of grass, trees and scrub under blazing sunshine and a blue sky.

While the grey semi-circular bulk of the Nazi-built terminal building always looms somewhere in the peripheral vision, the field still has the feel of a colossal country meadow, somehow stuck in the middle of the capital city.

And on Monday a good number of Berliners had turned out to celebrate the referendum victory to keep the park the way it is.

Helmut, a 62-year-old cyclist who had stopped for a break at the side of the airfield's main runway, told The Local he was all for the "100% Tempelhofer Feld" movement.

"It's so much better like this," he said. "We've got one over on those building lions."

He brushed away mentions of the city's urgent need for more affordable housing. "There is so much empty property in Berlin," he said. "And besides, there's a lot of space to build in the outer bits of the city."

Dog-owner Edith Hofer was also unconvinced by the city authority's arguments that building on the field would ease the Berlin's housing problems.

"Rent has gone up hugely over the last few years and that is a problem," the 60-year-old said. "But I doubt whether it would have been solved by building on this leisure paradise."

Hofer added that plans to build on Tempelhofer Feld were the latest in a series of projects by Berlin's government which proved unpopular or controversial, citing as an example the city's overdue and over-budget new international airport.

"A lot of things from the city senate recently have been a bit half-baked," she said. "They will just have to live with this result."

Sharian, a 51-year-old Berliner, also walking her dog across the airfield, highlighted the park's role as an impromptu city-centre nature reserve.

She said: "We have a lot of animals here, several different types of birds – and that's really important.

"Nature has to have its place. People forget that it was the animals who were here first, not humans."

Skateboarder Tania said she also supported the decision, hailing the park as a great free space for citizens to use.

"This place is awesome for people to come to and just do whatever they want," the 22-year-old said.

"They should keep it the way it is, otherwise people wouldn't have this place to enjoy themselves and play sports."

She said she was also suspicious of the possible consequences of building on Berlin institutions like Tempelhof.

"They want to build more to bring prices down, but that's not the point," she said. "In the end it will all just be buildings."

And 19-year-old Philomena, a Berliner on her first ever trip to the field, told The Local she had no issue with the building project in principle, but voted against it based on similar fears of a 'slippery slope' of development.

"I had nothing against building around the edges, I think there is enough room for it," she said. "But I fear once the building starts, it never quite stops – and then in the end everything is gone."

Berlin's mayor Klaus Wowereit, who promoted the Tempelhof development, admitted defeat on Monday after the referendum results came in, but said the project's death would just mean the same housing needed to be built elsewhere.

"We have up to 50,000 new inhabitants every year, the vacant space is getting smaller all the time," he told reporters. "Berliners want affordable housing."

But that space will now have to be found elsewhere.