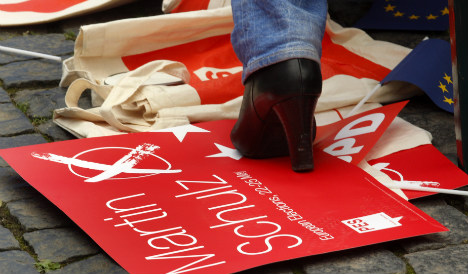 "Only if you vote for Martin Schulz and the SPD (Social Democratic Party) can a German become president of the EU Commission" read an advertisement published in Germany's top-selling Bild daily ahead of the election.

The appeal to national sentiment in the pan-European polls quickly sparked derisive commentary on Twitter under the hashtag #NureinDeutscher (Only a German).

"Youth unemployment in Europe is a huge problem, only a German can solve it," quipped journalist and blogger Tilo Jung.

"Foreigners at the head of the European Commission? Not under German Social Democracy," chimed in Sven Kindler of the ecologist Greens.

Guy Verhofstadt, the top Liberal candidate for the Commission presidency, made the point on Twitter that "Germans deserve the best president of the commission. Whereever he comes from."

The remaining 21 EU states vote on Sunday for a parliament which has gained increasing powers and a key say in who gets to head the Commission, the EU's executive arm.