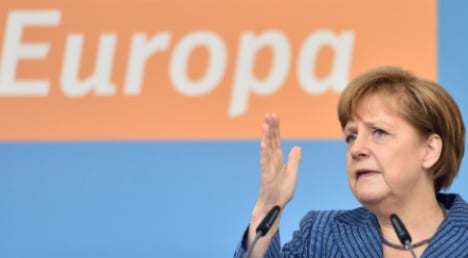 "Our task today is to again drive forward the peace project and — especially in view of Ukraine — to again and again talk to Russia, to again extend our hand, even if we don't always agree with everything" it does, she said.

Hailing the now 28-member EU for bringing peace after World War II, she said, "we solve our conflicts differently today, not with war, but with peaceful talks," German news agency DPA reported.

Merkel, speaking in the southwestern city of Worms, said she wanted her Christian Democrats to emerge the winners in Germany's vote as part of the European parliamentary elections on Sunday.

Addressing the ongoing financial woes of some EU member states, she again spoke out against a pooling of debt, while pledging to help countries in need that are ready to implement necessary economic reforms.

"We stand in solidarity, we help, but we also require those who need the help to do their homework," she said.

The European lead candidate of the centre-left Social Democrats, Martin Schulz, a German, also evoked the memory and lessons of World War II, in a campaign speech in Frankfurt.

In an election where populist and anti-immigrant parties are expected to make strong gains in many countries, he urged citizens to counter the rise of right-wing and anti-EU groups.

"They are the same ones who again propagate nationalist rhetoric, anti-Semitism, hatred and xenophobia," he said.

More than 64 million voters in the EU's most populous nation — including 61 million Germans and almost three million other EU citizens living there — are eligible to vote Sunday.

Germany will send 96 legislators to the 766-seat European parliament.

A recent German court ruling that eliminated a three-percent threshold to enter parliament is expected to give a boost to small fringe parties including the far-right National Democratic Party of Germany (NPD), while the eurosceptic Alternative for Germany (AFD) is also expected to win seats for the first time.