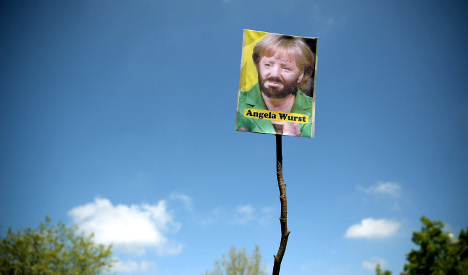 Are the elections "alles Wurst" to the Germans? Photo: DPA

If you walk the streets of Berlin, you see almost as many election posters as there were last September before the German elections. But if you ask the man on the street he does not care much about Sunday's vote. A recent poll found that 72 percent of Germans have no or little interest in the EU Parliament vote.

One reason for the apathy of voters in Germany could be that there is little debate and controversy – especially amongst the mainstream parties. Chancellor Angela Merkel’s conservative party and the Social Democrats (SPD) form a coalition government, and even if there were some European issues on which they disagreed, they would not highlight them now.

Both of Europe’s mainstream political families, the centre-right European People’s Party (EPP) and the centre-left Alliance of Socialists and Democrats (S&D) have appointed frontrunners for the job of President of the EU Commission. But that has not mobilized voters.

Both the EPP’s Jean-Claude Juncker and the S&D’s Martin Schulz have difficulties to find important issues on which they fundamentally disagree.

Therefore, a real dispute among the mainstream parties on EU-related issues such as austerity, Ukraine, banking-union, or free trade agreements has not really taken place. Instead both major parties hope to find voters’ confirmation of their domestic policies.

Indeed, the posters of the Christian Democrats do not show the face of Jean-Claude Juncker, but that of Merkel, who obviously is not running for a seat in the European Parliament or in the European Commission.

The lack of debate and disagreement between the major parties in Germany could offer a chance for the opposition to mobilize its voters.

After the German Constitutional Court declared all thresholds at EP elections unconstitutional, little more than one percent of the vote would suffice to gain one of the 96 German seats in the Parliament.

As well as the Green Party, the far-left and the Liberals, a new conservative Eurosceptic party has a good chance of sending some of its members to Brussels and Strasbourg.

The “Alternative for Germany” (AfD), a party calling for “less Europe” and an “orderly dissolution” of the eurozone emerged in 2013 and only narrowly missed the five percent threshold needed to get seats in the Bundestag in September. At the EU elections, the AfD may get between six and eight percent.

Eurosceptic parties, however, will be much stronger in other countries such as France, the UK, the Netherlands, Denmark, Italy, Greece or Austria. Polls show that altogether they could get up to 30 percent of the EU-wide vote. One consequence will be rather “German” – the need of a grand coalition between the two parties of the centre-right (EPP) and the centre-left (S&D).

This could mean that the direct outcome of the elections themselves should not matter much for Germans – they would get “more of the same” also on a European level.

However, the indirect consequences of a strong anti-integrationist vote in key countries like France, the UK or Greece could mean that Merkel will find it more difficult to forge alliances with her colleagues towards an EU that is more open towards trade and immigration and more open-minded towards domestic reforms for the sake of competitiveness.

SEE ALSO: Expats on why the will and won't be voting