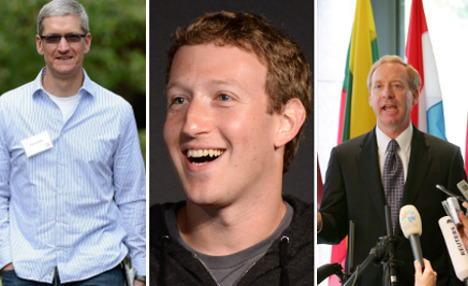 Apple's Tim Cook, Facebook's Mark Zuckerberg and Brad Smith from Microsoft will be invited to give evidence. Photo: DPA

A motion to invite them as witnesses would be adopted at a Thursday meeting of the committee of inquiry, Social Democratic panel member Christian Flisek told reporters.

The commission will invite Facebook founder Mark Zuckerberg, Google's executive chairman Eric Schmidt, Apple CEO Tim Cook, and Microsoft's executive vice president Brad Smith.
The panel was set up to assess the extent of spying by the US National Security Agency and its partners on German citizens and politicians, and whether German intelligence aided its activities.
It earlier decided it wants to question fugitive US intelligence leaker Edward Snowden, perhaps via video link or by sending an envoy to Russia where he has been given temporary asylum.
Snowden, regarded as a traitor by US President Barack Obama's administration and subject to an arrest warrant, has spoken via video link to other bodies, including the Council of Europe.
Germans were outraged by revelations last year that the NSA eavesdropped on Chancellor Angela Merkel's mobile phone, as well as about wider US surveillance programmes of Internet and phone communications.
Attorney General visit
US Attorney General Eric Holder will also travel to Germany to discuss privacy concerns after the NSA spying scandal damaged relations between the two allies.
German interior minister Thomas de Maizière told journalists in Washington on Wednesday that Holder has accepted an invitation from Berlin to explain how the US would curb spying on foreign nationals overseas.
"We will have this discussion together in Germany," he said.
The US Justice Department did not immediately confirm the trip and de Maizière said that Holder's visit would not take place "before the summer recess".
In a speech in January, US President Barack Obama said he had taken "the unprecedented step of extending certain protections that we have for the American people to people overseas".
Obama directed the intelligence community and Holder to develop "safeguards" for the privacy of foreign citizens.
After meeting Holder on Wednesday, de Maizière said details are still scarce, stressing that "no decision" has been made in Washington on what restrictions would apply to spying overseas.
But he welcomed plans to end the NSA practice of scooping up metadata from US telecoms companies, which will also apply to foreign citizens if their communications is routed through the US.
"It's going to be a long path, but I see some progress," he said.

Merkel admitted during a visit to White House earlier this month that differences on this issue of surveillance still remained.
But both governments appear to want to overcome the diplomatic row, despite Washington's rejection of a legally binding no-spy agreement with Germany.
Germany and the US agreed to engage in a "cyber dialogue" to address their disagreements over intelligence gathering and data protection, with a first round of talks scheduled for late June.
SEE ALSO: German IT expert hacks NSA homepage