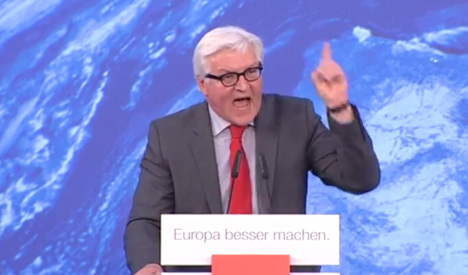 Foreign Minister Frank-Walter Steinmeier showed a rare amount of emotion for a German politician in an appearance at a rally for the Social Democrats (SPD) in Berlin on Monday evening.

Several hundred largely leftwing and pro-Russian demonstrators had gathered at Berlin’s Alexanderplatz to criticize Steinmeier’s stance towards Ukraine, accusing him of being a “warmonger”.

Placards were held up with pro-Russian slogans on, describing the pro-western Kiev government, which Germany has backed, of being a “junta” and murdering its own people.

“Stop the Nazis in Ukraine,” one of the placards read.

Speaking above the noise and loud speakers of the protesters, a visibly angry Steinmeier ripped into the demonstrators.

Accusing them of “nonsense”, he said: “If we listened to people like those over there, Europe would be broken.”

“You should consider who the warmonger is," Steinmeier added. “Those who describe other societies as ‘crap’ are the ones sparking war and conflict.”

“The world is not split into pacifists and villains,” he continued. “The world is more complicated and thank god there are people who still understand that.”

Steinmeier's words appear to have struck a chord with Germans, with thousands of comments on YouTube and more than 400,000 views.

A poll in February placed Steinmeier as Germany's most popular politician, ahead of Chancellor Angela Merkel.