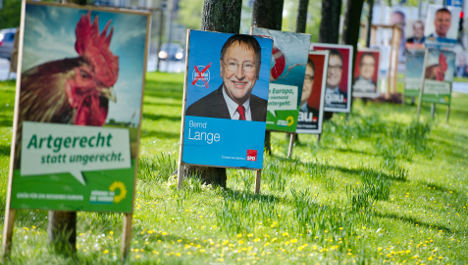 Voting in a different EU country can make politics seem even more tricky, with a new set of politicians, parties and issues to contend with.

But all EU citizens in Germany can head to the polls on Sunday to cast their vote in the European Parliament elections.

For 42-year-old Italian-born publisher Camillo, the election is more about Europe-wide policy than national issues.

Among the priorities Camillo wants brought to the fore is "an EU common defence policy, especially after the whole Ukrainian debacle".

He also favours a "tax harmonization across the EU" to combat corporate tax havens and "a shared and comprehensive approach to immigration".

But Camillo's reasons for voting in his adoptive Germany rather than his native Italy lie much closer to home in Berlin, with the issue of protecting the Tempelhofer Feld, a popular public park on the site of a defunct airport.

Although EU citizens can't vote in the referendum concerning the site's future, Camillo said the Social Democrats' (SPD) support of building on the site influenced his decision in the EU elections.

"I want it to stay the way it is, and the SPD supporting the construction of thousands of houses there made sure they won't have my vote."

And 34-year-old Belgian-British citizen Christopher Steel told The Local he agreed country-level issues should take a back seat when it came to EU elections.

"I wouldn't see the point of voting for the EU out of national interests. For me it defeats the point."

For Steel, voting in these elections is "about developing common standards and EU policy as a whole, rather than some party trying to represent…national interests at the European level”.

While he was unaware that as an EU citizen he could vote in Germany's ballot on Sunday, Steel said the idea of choosing an EU nation in which to cast his vote was interesting.

"I would have to see if I feel better represented by a Belgian or a German party," he said.

But for others, national issues tend to count more than European in making choices on EU politics.

Efthymios Penessis, a 38-year-old artist originally from Athens, Greece, told The Local he would be voting on economic policies – primarily his support for German "reparations for the occupation of Greece" during World War II and the principle of "common debt" among European countries.

SEE ALSO: 'Why foreigners must get the vote in Germany'

But 29-year-old Italian citizen Davide said he considered the key challenges faced by Europe as common to all the member states.

"The issues are not so different in Germany than in my home country – Unemployment and jobs, free movement and migration, privacy, environmental and energy issues like shale gas, the Ukraine crisis.

"These are common issues all over Europe and are being debated in all member states."

Why I’m not voting

British student Patrick Constable, who lives and works in Berlin, told The Local that while he would have voted in Germany rather than the UK, he had lost track of German politics.

"I'm broadly apathetic," the 21-year-old said, but added he would probably have voted for far-left party Die Linke, believing them more of a genuine left wing option than the SPD, whom he sees as drifting into the centre.

"I wouldn't vote for them because of the cuts they made and their move towards the right," he said.

"But I see Die Linke adverts about a higher minimum wage, better pensions and restricting arms dealing, which I think is very important.

"The social and economic issues are most significant for me."

Despite two decades in #Germany @TheLocalGermany still British – not European. EU elections no thanks.