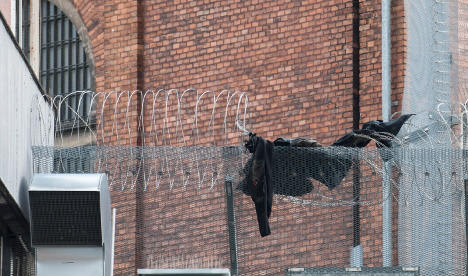 In the first breakout from Moabit prison in north-west Berlin for 15 years, two men, one of whom is accused of murdering a city nightclub owner, broke out by scaling a barbed wire fence with a blanket.

They easily sawed through the prison bars and security was lax because of building work, Bild newspaper reported.

The alarm was raised shortly before 3am on Monday. But guards believed it was a false alarm as construction work was underway.

It wasn’t until 5.30am a guard noticed two bed sheets hanging from the first floor and finally noticed the two men had escaped.

Also that morning, shortly before 7am, guards found a 48-year-old inmate who had hung himself in his cell in an unrelated incident.

A riot then broke out in the prison injuring four guards. Amid the chaos a third inmate tried to escape but was stopped.

That afternoon Justice Senator Thomas Heilmann put the escape down to a “series of coincidences”.

"If I had not seen it myself, I would have not believed it,” he said.

It also emerged that the prison's seven guard towers have not been occupied for years.

Heilmann said he wanted to appoint a commission of inquiry into the escape.