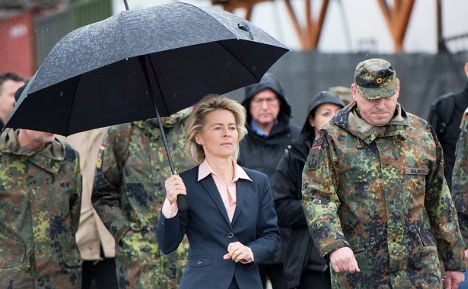 The poll found that some 60 percent of Germans preferred "restraint" when it comes to "taking responsibility in international crises", compared to around 37 percent who favoured "greater engagement".

The result – which reverses the results of a similar survey 20 years ago – may dampen the hopes of some German politicians for Europe's biggest nation to play a more active role in military foreign policy.
President Joachim Gauck and Defence Minister Ursula von der Leyen have this year argued Germany should overcome its post-war reluctance to help tackle conflicts and engage more forcefully abroad, including by sending troops if necessary.
Foreign Minister Frank-Walter Steinmeier said on Tuesday that, when it comes to openly discussing tough engagements in distant troublespots, "we're still missing this DNA, and I think we'll have to work on that".
Preventing far-away ethnic conflicts, defending allies and protecting weak states from aggression were deemed least important in the Körber Foundation survey of 1,000 people, which was commissioned by the foreign ministry and published in the Süddeutsche Zeitung.
Instead, respondents favoured promoting human rights, followed by environmental and climate protection, and securing energy supplies.
For decades after World War II, Germany, burdened by memories of and guilt about Nazi terror and aggression, stepped softly on the world stage and refrained from sending troops abroad.
Europe's largest economy has since deployed peacekeepers to global hotspots, from the Balkans to Afghanistan, but has also earned criticism for staying out of other conflicts, especially the 2011 NATO intervention in Libya.
In the survey about their foreign policy priorities for Germany, 66 percent named human rights as "very or rather important", followed by 59 percent for environmental and climate policy.
Securing energy supplies came third, likely brought into focus by the Ukraine crisis and the perceived threat of Russia cutting its vital gas supplies.
Online data security was an important goal for 56 percent in the aftermath of the NSA surveillance scandal, while fighting international terrorism was also seen as important by more than half of respondents.
At the very bottom of the list, supported by only 25 percent, was the goal of "protecting economic interests abroad".
SEE ALSO: Is Germany shying away from global role?