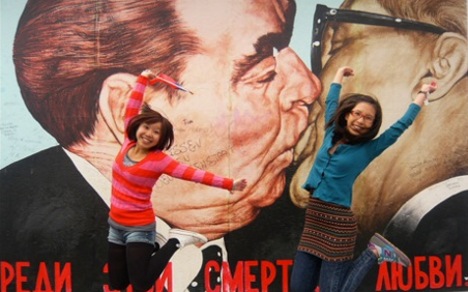 VisitBerlin, the city's official tourism website, estimates nearly 10,000 people are dancing the night away in Berlin's clubs every weekend, many of them tourists.

Given the variety of attractions, it is perhaps unsurprising that the German capital has been experiencing one of the highest tourism growth rates in the world.

But what affect does this tourism influx have on society, and just how does one define the term "tourist" in a city as transient as Berlin?

Filmmaker Nana Rebhan, 35, explored these questions in a documentary being premiered next Wednesday called "Welcome Goodbye."

Rebhan who moved to Berlin from a small town in Franconia, northern Bavaria, nearly 10 years ago, decided to begin the project after noticing anti-tourist stencils sprayed on walls around her rapidly changing Schillerkiez neighbourhood in Neukölln.

"I couldn’t understand why people were writing 'No More Rollkoffer’ [suitcases] everywhere," she told The Local.

"I was wondering what the problem with tourists was, especially since the line between tourist and Berliner is not very sharp.

“How many days or weeks or months do you have to be in Berlin to be a tourist or a Berliner? Many people have their own ideas about what it means to be a Berliner. This is one of the topics in my film." Tourism is a billion dollar industry in a city described in 2004 by Mayor Klaus Wowereit as "poor, but sexy,"- a tag line which may need to be reconsidered if growth continues at the present rate.

According to figures compiled by the Office for Statistics in Berlin-Brandenburg, Berlin welcomed 2.3 million visitors between January and March this year, an increase of 2.8 percent from 2013. During this period alone, visitors stayed a total of 5.4 million nights.

But some see tourists, particularly non-Germans as the reason for stiff increase in rent prices, noisy streets and neighbourhood upheaval. Rent prices increased by eight percent in 2013 according to the German Institute for Economic Research, more than any other German state.

"In my neighbourhood, the rent has increased three times in the past two years," said Rebhan. "For people from London, New York or Paris, €600 or €700 a month is very low, but for Berliners, that's a lot of money."

The film will be shown from May 29th at Moviemento and Kino Central, Berlin.