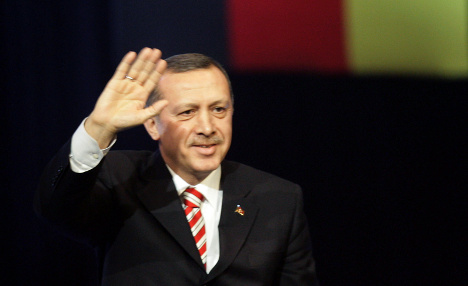 Amid mounting anger within Turkey over his response to last week's coal mine blast in which 301 died, Erdogan faced condemnation and calls to cancel his visit next Saturday from across the political spectrum in Germany.

Erdogan is due to address supporters in Germany, where three million Turks or people of Turkish origin live, with a visit to the western city of Cologne. For the first time, some 2.6 million Turks living abroad, including 1.5 million in Germany alone, will be able to cast their votes in the August presidential vote in which Erdogan is expected to stand.

But authorities in Cologne expect more than 10,000 protesters in a demonstration being organized by the German Alevi Association (AABF).

The city’s mayor, Jürgen Roters, suggested on Monday that Erdogan should cancel his visit. "For me, as a responsible politician, the decision would be clear: given the dramatic events with so many unresolved deaths, there are more important things than taking part in election campaign meetings abroad,” he said.

Aydan Özoguz, a Social Democrat who is the government's integration tsar and its first national minister with Turkish roots, described as "absolutely shattering and unacceptable" pictures from Turkey showing action taken against demonstrators. "Such pictures distance Turkey from democratic conditions," she told the Frankfurter Allgemeine Sonntagszeitung newspaper (FAS). Images of Erdogan's aide kicking a protester who was held down have sparked outrage in Turkey, where critics say the prime minister failed to show sensitivity in the crisis.

A senior member of Chancellor Angela Merkel's conservatives, Wolfgang Bosbach, who is chairman of the Bundestag's interior affairs committee, said the Cologne event should be called off. He told Monday's Bild newspaper it was already difficult to accept Erdogan bringing the Turkish election campaign to Germany.

"In the current situation he should be concerning himself from dawn ‘til dusk with how the devastating mine accident in Turkey could have happened," Bosbach said.

From the ranks of the opposition, Jürgen Trittin of the Greens, told FAS that Erdogan had "lost all sense of reality", while the far-left Linke's Sevim Dagdelen called for a protest against the visit.

Erdogan is also planning to visit France and the Netherlands in May, according to a Turkish government source.