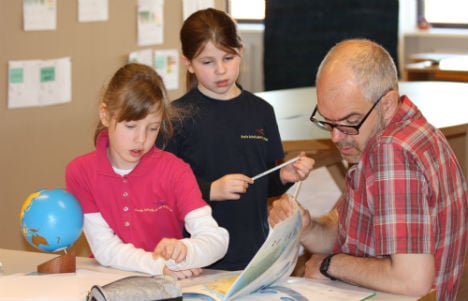 Germany’s capital offers a greater number of alternative schools than ever, but whether they are private or state funded, most still stick to the tried and tested formula of standard education methodology and techniques.

The bilingual Freie Schule Anne-Sophie, Berlin in Zehlendorf however, turns much of the traditional model on its head, from the teacher-pupil relationship right down to the actual physical surroundings where they study.

These differences become apparent the minute you walk into the building. Pupils here are taught in large, open plan spaces, known as learning studios, designed specifically to create what the founders call a kind of third teacher, reasoning that the learning environment has a major role to play in a child’s education.

Inside the building meanwhile, the idea of a teacher standing in front of the class and lecturing, is completely non existent. Here, they are referred to as “learning coaches”, while the pupils are called “learning partners”, a theme which is central to the whole ethos, according to head of English, Adrienne Tscherniak.

“The important thing is the breakdown of hierarchy; of who is responsible for the learning and the imparting of facts. The emphasis for us is on coaching. Children are partners with us, but also with each other, which gives them more confidence and a greater sense of self initiative,” says Tscherniak.

The foundation of the school’s philosophy is a mixture of education cultures.

“There are many different ways for people to learn,” she continues.

“What makes us unique, is the combination of different elements. For example, we take the idea of autonomous learning from Montessori, but we blend it together with many other sources at the same time.”

It gives the children a greater sense of autonomy and self-responsibility, to plan their work and time to reach both the school’s mandatory goals following the Berlin curriculum, as well as their own personal ones.

How they actually do it is very much down to them though. Again gone are the traditional tools, in favour of a work plan and so called learning diary, where plans and aims are mapped out.

“We try not to tell them what to learn, but give them goals, and the tools to help them get there. Ultimately, it comes down to confidence and self-motivation," adds Tscherniak.

Everyone is grouped in so-called learning families, which encompass three separate age groups. The coaches meet them twice a week to help with planning and deal with any other social or learning issues, while they all eat together as well.

“We find that this helps the atmosphere, and we also see different relationships forming, as they take responsibility for each other in a kind of little brother, big sister way, making partnerships that they wouldn’t possibly have in more traditional surroundings” says Tscherniak.

The concept was founded in 2006, when Bettina Würth founded the first Freie SchuleAnne-Sophie in Baden-Württemberg. The Berlin school, which is in its third year, currently has 140 learning partners; 70 at the secondary school and 70 at the primary school, offering grades 1 – 10, with plans for expansion in the near future.

Tscherniak, admits that it is not always an easy transition for the new students when they first arrive, and that the system will not be suitable for all children, especially those who have a greater need for structure. But like any other system, it comes down to the individual.

“Many children don’t know what to do with their freedom and have a settling in period, but if there are enough students around them who are more in the routine and can help bed them in, it normally takes around three month for them to get into the routine,” says Tscherniak.

On a practical basis, funding comes from the State and from parents, with tuition fees based on family income.

Scholarship places are also available for the less well off, while the insistence on a uniform, highly unusual again in German schools, is also seen as anther way of breaking down social and economic borders.

“It is a relaxed kind of uniform but we feel it is important, because essentially it builds a sense of unity and community, “ says the Head of English.

Tscherniak says she has seen a noticeable change in attitudes towards the Freie Schule Anne-Sophie Berlin in recent times.

“People are very curious. More and more are coming to our information meetings and evenings and they seem to be fascinated by the idea that it is such a different environment to learn in. There are many bi-lingual schools in Berlin, but we feel we have found a good fit here.”