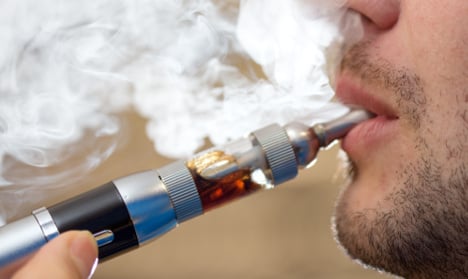 Not suitable for children. Photo: DPA

Young people are the target group for the e-cigarettes, said Kathrin Sonnenholzner, chairman of the Health Committee in the Bavarian Parliament on Thursday, calling for the ban.

Normal cigarettes are forbidden at schools, whereas e-cigarettes are allowed. “We mustn’t blame the headteacher, but make it the responsibility of the state government,” said Sonnenholzer from the Social Democrats (SPD).

It comes a week after Federal Drug Commissioner Marlene Mortler (CSU) called for a ban on electric water pipes and e-cigarettes for teenagers across Germany. “We must close this legal loophole in youth protection concerning electronic nicotine products as soon as possible,” she said in Berlin last Thursday.

The sale of e-hookahs and e-cigarettes to children and teenagers and their consumption cannot be prevented under the current Youth Protection Act.

The SPD has insisted on an exact declaration of what the e-cigarettes’ vapour actually contains.