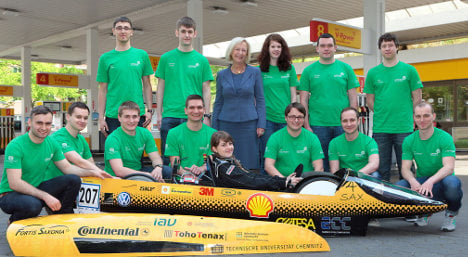 Minister for Education and Research Johanna Wanka with the team from Chemnitz Photo: Shell

The 20 teams are taking part in the Shell Eco Marathon in Rotterdam and the winner will be the vehicle which completes the most circuits of the track on the least amount of fuel.

It aims to encourage upcoming designers and engineers to focus on fuel efficiency and present the next generation of climate-friendly vehicles.

“The Shell Eco Marathon provides a platform for young constructors to test out vehicles that they have designed and developed themselves,” said Shell's chief scientist Wolfgang Warnecke.

Germany is the second most represented country after France which has 57 teams.

The 16 students from the Hamburg University of Applied Sciences taking part in the competition have called their carbon-fibre vehicle Pingu II. It weighs just 45 kilos and is driven by a fuel cell powering an electric motor geared to the front wheel.

The Technische Hochschule Ingolstadt has a team competing this year for the first time. Their vehicle, Incredible, is powered by an Ethanol hybrid motor and is described as "road-suitable".

"Motoring can become ecological and sustainable… how far this can be realized depends on the consumer,” the team told The Local.

Detlef Gebert, from the Oberstufenzentrum Ostprignitz-Ruppin, which also has a team represented, said: "People who have to travel 100 km to get to work can do that with an electric car no problem, as long as their workplace has solar charging facilities and the car owner has panels on their garage roof to charge batteries during the day." Team High Efficiency from Hochschule Karlsruhe is placing their hopes on skinny drivers. "We looked for drivers who were light and were keen,” Tobias Burkhardt from the team said. "We will definitely break the 1,000km mark."

The frontrunner this year has is a French team called Microjoule-La-Joliverie.

German Minister for Education and Research Johanna Wanka praised the event for focusing on “one of the most important questions of our time” – efficient energy usage.

Launched by two US scientists back in 1939 to see who could travel the furthest on a tank of fuel, eco marathons have become increasingly popular over the years.