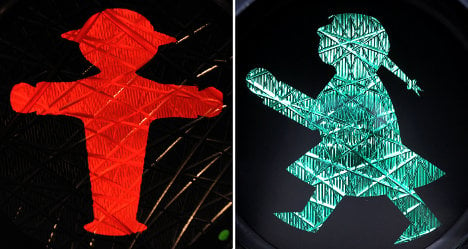 The Ampelfrau is used in Bavaria, but a motion before Berlin's district assembly warned if used in the capital she shouldn't have a pony tail or a skirt. Photo: DPA

The Social Democrats (SPD) in Berlin’s central district want to introduce an Ampelfrau to the capital's crossings to stand alongside the little green and red man.

In a motion to Berlin’s district assembly (BVV) the SPD’s district leader Martina Matischok, 49, requested an Ampelfrau be introduced. She should represent the modern-day woman and be “self-assured”, Matischok's request stated.

There is already a woman on pedestrian crossings in several German cities, she pointed out in the motion, which also included photos of examples from Belgium and England.

The document said the woman should not fulfill any “sexist stereotypes”. She should not have a pony tail or a skirt, it said, and certainly not high heels and a mini skirt.

Matischok told The Local: “We don’t want to replace the Ampelmann, we want to complete him. It’s about equality.”

But even if the central district authority approves the plan, it will be up to traffic authorities to carry it out and they are less than keen.

A spokesman for the Berlin Senate Transport Department said the city’s streets would be a “total mess” if an Ampelfrau had to be installed at every crossing.

A decision will be made by Berlin’s district assembly on May 22nd on whether to carry the motion. Matischok said she expected it to be handed to a committee for further investigation.

“It’ll be great if we can get it everywhere but I don’t think that will be possible because of the cost involved,” she said. “But a few places would also be good.”