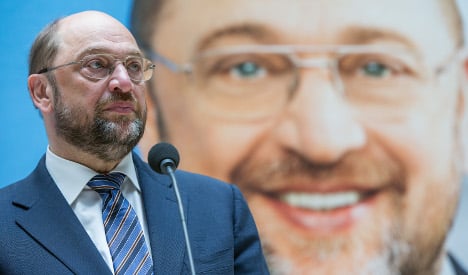 German Martin Schulz is the lead candidate for the socialists in the EU Parliament elections. Photo: DPA

The centre-left Social Democratic Party (SPD) is in a coalition government in Germany with Chancellor Angela Merkel's conservative bloc. But in the EU parliament it is part of the Party of European Socialists (PES) and it is hoping to make gains from the conservatives on a programme promising economic growth and reduced youth unemployment.

Although they don’t go as far as Chancellor Angela Merkel’s conservatives in their stance on the balance of powers between national governments and the EU, the SPD calls for cities and regions to play a bigger role in EU decision making.

The manifesto stresses a respect for the subsidiarity principle should be respected – the idea that the EU should confine itself to tasks that cannot be better managed by municipal, provincial or national governments.

– To strengthen the EU parliament, giving it powers to initiate legislation and control the EU budget.

– To move away from purely austerity programmes and complement economic and fiscal reforms by a European growth package that invests in innovation, education, employment and training.

– To keep the door open to eventual EU membership for the Balkan states and Turkey, provided that they meet necessary standards in democracy, human rights and the rule of law.

The Social Democrats want a tax on financial transactions and stronger financial regulation, including a strict separation between commercial and investment banking, as well as an end to speculation on raw materials and foodstuffs.

The manifesto also calls for the introduction of a minimum tax on corporate profits across the EU, alongside a requirement for companies to pay taxes in the country where they earn profits.

– To fight tax evasion through better information sharing, the withdrawal of banking licenses from institutions that facilitate it, and the imposition of sanctions against tax oases.

– To better implement and if necessary expand EU programmes to reduce youth unemployment.

– A free trade agreement, including the Trans-Atlantic Trade and Investment Partnership (TTIP) with the United States, but not a deal which undermines EU consumer protection and environmental standards.

The SPD wants to set binding targets for the expansion of renewable energy in the European Union.

It also wants to reactivate carbon emission trading and set a binding target for the EU to reduce carbon dioxide emission levels to 40 percent less than 1990 by 2030.

The manifesto calls for more coordination between EU states to house refugees.

It also states that EU border protection must not come at the expense of human rights and adds that border patrols have the responsibility to rescue those in danger of drowning in the Mediterranean.

Like the CDU, the SPD wants to strengthen the EU's foreign and security policy with the eventual goal of forming a European army.

It also wants to work together with Russia to reach a solution in Ukraine, while explicitly stating that a respect for democracy and human rights remain the basis of an EU association agreement with Ukraine.