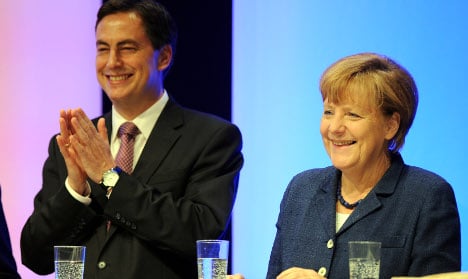 Despite being firmly pro-European Union, Chancellor Angela Merkel's centre-right party calls in its manifesto for the option to return powers from the EU to national parliaments – echoing the eurosceptic Alternative für Deutschland party, as well as British Prime Minister David Cameron.

“To strengthen a citizen-orientated and democratic political union, a reparation of powers to the national level must be possible,” it said.

The CDU has campaigned against Eurobonds throughout the economic crisis and has taken a tough stance towards struggling countries which have been bailed out – largely with German taxpayers' money.

Its manifesto calls for reforms to improve the economic competitiveness of other European countries.

And while it wants to leave the door open to EU membership for the Balkan states, it rejects Turkey’s membership.

At an election debate on Thursday night in Berlin organized by think-tank Open Europe Berlin, Birga Köhler from the CDU said: “There is no crisis of the Euro, but a crisis of individual countries. The EU remains a success story. It functions as it is now.”

She added that Europe was a family rather than an investment, providing security and freedom for the citizens of member states.

The CDU supports the Trans-Atlantic Trade and Investment Partnership (TTIP) between the EU and the United States, which would create the world’s largest free trade zone.

The CDU’s Europe manifesto states the EU should play a leading role in fighting climate change. A new climate agreement should be made to replace Kyoto, including binding targets for emerging countries.

It calls for European greenhouse gas emissions to be reduced to 40 percent less than 1990 levels, by 2030.

Immigration is one of the hot topics in the European elections and the CDU says it wants to discourage "social welfare immigration" and will change EU law if necessary to do so.

The CDU supports the development of a European army and wants to increase military cooperation within the EU.

Its manifesto also calls for good relations with Russia – but adds that the depth and breadth of this relationship depends upon Russia fulfilling its international responsibilities and respecting democracy and the rule of law.

The CDU wants to reform the United Nations Security Council by securing first a permanent seat for Germany, with the ultimate aim being one for the European Union, once it has a joint foreign and security policy.

SEE ALSO: Politicians turn to cow to get out the vote