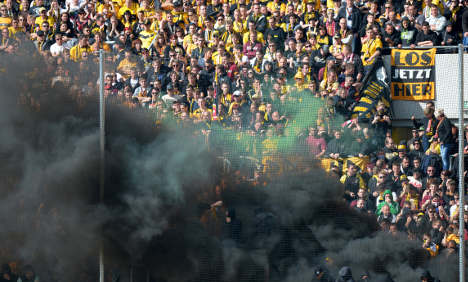 Smoke bombs and flares were let off during Sunday's game. Photo: DPA

After the final whistle Dresden supporters unveiled a huge banner with a clear message to the players – “You have one hour to leave our city.”

Dynamo Dresden’s director of sport Ralf Minge reacted with alarm. “You always have to take such threats from fans seriously,” he said.

The game itself was stopped for 15 minutes when Dresden fans threw flares, smoke bombs and fire crackers onto the pitch.

Police escorted the Dresden players from the stadium, while the Bielefeld team bus also left under police protection.

Around 1,000 police officers were at the game to keep order.