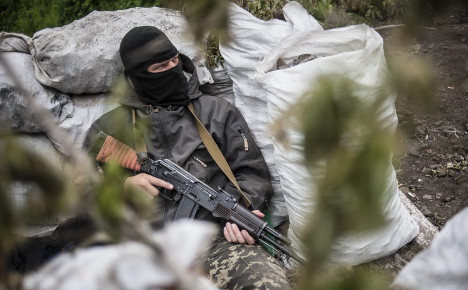 A pro-Russian protester takes up positions by the railway lines, near Slaviansk, Ukraine. Photo: DPA

Frank-Walter Steinmeier "intends to travel to Ukraine tomorrow," his spokesman said on Monday.

"He'll hold talks in Kiev, among other things, with representatives of the Ukrainian government."

Steinmeier also plans to visit the restive east of Ukraine and will aim to "support the efforts of the OSCE, efforts for a national dialogue", he said, referring to the Organization for Security and Cooperation in Europe.

Under OSCE plans, a round table bringing together the different parties in the Ukraine crisis is due to begin in Kiev on Wednesday.

Veteran German diplomat Wolfgang Ischinger, a former ambassador to Britain and the US, and current head of the annual Munich Security Conference, has been chosen by the OSCE as a co-moderator of the dialogue.

Ischinger took part in the Dayton negotiations on Bosnia as well as NATO's eastwards enlargement.

The foreign ministry spokesman, when asked whether the OSCE talks would include representatives from Russian-speaking regions, said: "Naturally, without representatives of the east and south it wouldn't make sense".

Steinmeier was due later on Tuesday to head to Paris where he will take part in a French cabinet meeting on Wednesday and will speak about Ukraine as well as other issues, including the European parliamentary elections this month.

The European Union on Monday ramped up its sanctions against Moscow over the Ukraine crisis, adding 13 Russians and Crimeans as well as two companies to its existing blacklist, EU diplomats said.

Government spokesman Steffen Seibert said presidential elections planned on May 25th would be crucial for helping stabilize the country and urged Russia to use its "significant influence" to help.

Throughout the Ukraine crisis, Germany has stressed the need for continued dialogue with Russia, with which it has deep business and energy links.

He cautioned that President Vladimir Putin had already shown a willingness to accept "massive economic damage" as the price for his geopolitical stance.

This made clear, Roth said, that "economic sanctions alone, no matter how tough, do not necessarily lead to the outcome we desire".

The senior diplomat also spoke in favour of inviting pro-Russian separatists to the table in a possible new round of Geneva talks to resolve the standoff, speaking to the Handelsblatt business daily.

In German politics, the view on the Ukraine crisis is divided, with some prominent political figures showing understanding for Moscow's stance.

In newspaper interviews on Sunday, former chancellor Gerhard Schröder stood by his friendship with long-time confidant Putin, saying he was "not a persona non-grata".

Schröder, who has a board position on a pipeline project majority-owned by Russian energy giant Gazprom, defended a public embrace he gave Putin in St. Petersburg in late April.

The former chancellor also blamed the European Union for having sparked the crisis with its offer of an association pact to Kiev last year.

"The fundamental flaw lay in the EU association policy," Schröder said. "The EU ignored that Ukraine is a culturally deeply divided country."

"The 'either-or' stance – either association with the EU or a customs union with Russia – was the initial error," said Schröder.

The St Petersburg International Economic Forum runs from May 22nd to 24th – a meeting which Der Spiegel magazine said the Russian government had developed into Russia's answer to Davos.

Last year Chancellor Angela Merkel was there, but next week it would seem most western politicians will make diplomatic noises about not being able to make it.

Yet their absence will not prevent business and industry leaders being there. Der Spiegel said on Monday its list of confirmed attendees included Johannes Teyssen, head of energy giant E.on, Olaf Koch, CEO of Metro, and Harald Schwager, head of oil and gas at BASF.

Daimler is not only sending its head of Russian operations, it is also sponsoring the conference, Der Spiegel reported – and will provide a limousine service for people taking part.

"We believe that such dialogue-oriented events make sense particularly at times like these," said a Daimler spokesman.

SEE ALSO: Germany warns of 'point of no return' in Ukraine