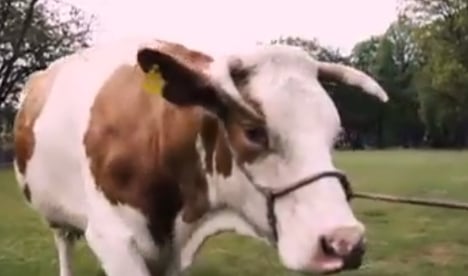 Patricia the cow is a YouTube star. Photo: YouTube/screenshot

The centre-right Christian Democratic Union (CDU) in the town of Ahaus, North Rhine-Westphalia, decided to take a different approach to the election campaign by filming an udderly ridiculous video, comparing their party to a strong cow.

The video shows Patricia the cow performing heroic acts and being thanked by the people of Ahaus. “Thanks CDU,” says one man to the cow after she foils bank robbers. “She is strong, like the CDU,” the narrator says.

Shooting of the video took place at the end of April and the CD-Moo homepage described the event as a “medium-sized gathering”. The video has had more than 65,000 views on YouTube.

Thomas Vortkamp from the Ahaus CDU told Bild newspaper he wanted to “do something different to reach new, younger voters”. “The cow is the perfect symbol for our agricultural region,” he said. Some may accuse him, however, of trying to milk the vote.