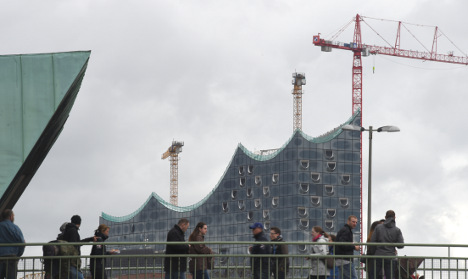 A waste of taxpayers' money but is it also a criminal case? Photo: DPA

A spokeswoman for the prosecutor’s office confirmed to the Hamburger Abendblatt newspaper on Wednesday that an investigation had begun on April 25th, following a report into the cost overrun by a parliamentary investigative committee.

Prosecutors are working through the 640-page parliamentary report, which documents a seven-year history of misinformation, incorrect cost estimates, and flawed expert assessment in the construction of the building.

The estimate in 2007, when the city gave the green light for the project, put the cost to the taxpayer at €114.3 million – though that was already a 48 percent increase on the original 2005 proposal of €77 million.

It is now thought that by the time the Elbphilharmonie opens in the spring of 2017, the taxpayer will have contributed a staggering €789 million.

The huge building costs were revealed in a report in November which found €300 was spent on each toilet brush and €1,000 on a paper towel dispenser.

The parliamentary committee named those it found chiefly responsible for the massive cost-explosion as former Christian Democrat mayor Ole von Beust, his advisor Volkmar Schön, former senator Karin von Welck, as well as the heads of the state-run company charged with realizing the project, the architect studios behind the design – Herzog & de Meuron as well as Höhler & Partners – and the construction company Hochtief.

One possible criminal charge could be directed against the state-run company, which the report said had willfully misinformed the state parliament "through all phases, from cost prognoses to contract agreements up to the cost increases and the resulting additions.”

It found the public was not informed that the city would become the building owners for the hotel, multi-storey car park, and the catering at the concert hall. That decision was made at a meeting at which the mayor was present in June 2006. The socialist party, Die Linke, estimated that this alone led to an increased cost to the taxpayer of €288 million.